The first meeting today was the combined prayer meeting. It was led by Thandika Chirwa (seen below), a deacon at Mount Makulu Baptist Church. We had a better attendance than we had on Tuesday, and as for pathos in prayer it was equally refreshing. It was good to see the Namibian women coming to the conference in their Herero traditional attire (see their photo at the end of the blog). Jealousy aside, it is certainly better than our Zambian Chitenge attire. 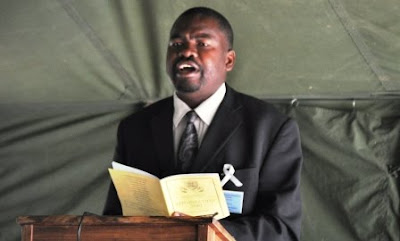 Later, we broke up into the two conferences—the Reformed Family Conference and the Reformed School of Theology at 09.30 hours. I attended the Reformed School of Theology which took place in a tent next to the old Lusaka Baptist Church building. Bruce Button, the Principal of the Sovereign Grace Theological Seminary, was the first to speak. He read from Proverbs 31, the famous passage of the excellent wife, and dealt with the work of a wife in the home and in the community. This woman in Proverbs 31 was busy both at home and in the community. But clearly, her priority was the home.

Bruce (picture below) took us right back to Genesis 1 and 2. He said that we give expression to the image of God in us when we multiply, fill the earth, and subdue it. This command is what is called the cultural mandate. And we fulfill it by creating a society and then using creation itself to develop a culture. In doing our work, we are being truly spiritual. This has tremendous implications with women working at home—especially with little children. Working with dirty nappies does not feel very spiritual. And yet it is! By washing nappies, you are subduing germs. 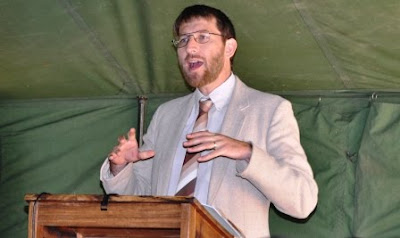 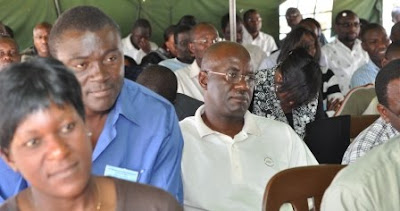 Bruce handled the issue of women working outside the home in a sensitive and balanced way. Finally he made the point that the virtue was not in staying at home but in working hard at home! 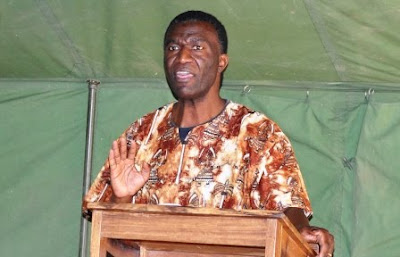 Choolwe Mwetwa (picture above), the Pastor of Central Baptist Church in Chingola, took us in the second session in the morning. His message was on the work of husbands and fathers as priests in the home, using the example of Job (in Job 1). Choolwe showed how Job did not respond to the possibility of his children sinning, and then went on to show how he instead responded. In the latter, he showed that Job prayed and taught his family the ways of God. Finally, he pointed to Job’s integrity and urged us not to contradict our teaching by our example. He applied all this to the work of a husband and father as the priest in the home.

Meal times are always a good time to catch up with some consultation and counselling. Hence, above, you will notice James Williamson (our part-time missions coordinator at Kabwata Baptist Church) consulting with the leaders of the two Reformed Baptist churches in Western Province. 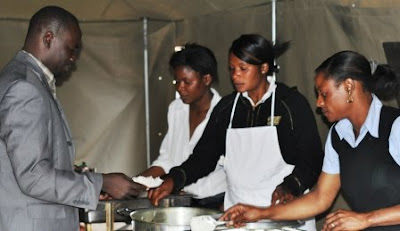 The meals themselves were well-cooked and tasty. We had three feeding points around the church grounds and usually within 3o minutes, the queues were gone and everyone looked well fed. We thank God for the catering company that was hired to provide the meals. They were efficient, joyful and very hardworking.

After lunch, both Choolwe Mwetwa and Bruce Button formed a panel and answered questions. They started with questions that were written down prior to the session. After that they proceeded to answer questions from the floor. After an hour in the Q&A session, I excused myself because I had to work on a newspaper article that needed to be submitted that same afternoon. So, I missed the second hour of the Q&A. 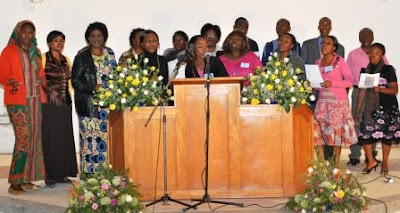 The evening session began at 18.30 hours sharp with a song by the Kabwata Baptist Church music ministry. They sang “Jerusalem” with heart and soul and vigour. Then Misheck Daka came forward and did a powerpoint presentation on one of the joint projects among the Reformed Baptists in Zambia—the Zambian Reformed Baptist Building Trust Fund. His slide show of complete and incomplete church buildings across Zambia was an eye-opener. He appealed to the churches for faithful subscriptions to the Fund, faithful repayment of loans, and generosity in gifts to the Fund. 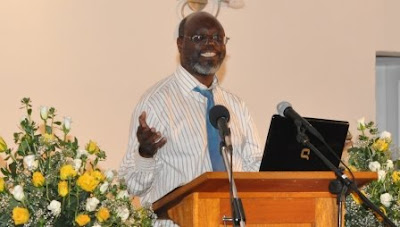 Jerran Phiri (picture below) then took up the podium as our song leader and led us in singing “In Christ Alone” and later “I’m pressing on the upward way.” We then listened to Dr Grave Singogo, the pastor of Evangel Baptist Church, who was the preacher for the evening. In his usual humorous manner, Grave preached from Ephesians 5:31-6:4. He told us that parenting necessitated the control of anger and the tongue. There was also a need to inculcate godly discipline in children. Finally, it involved teaching children both socially and spiritually. 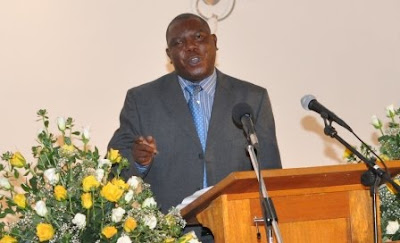 Grave (picture below) ended with some pastoral comments. I will just list them to you: (1) Avoid over-protection. (2) Avoid comparisons between your dependents and also with other children in other homes. (3) Avoid favouritism. (4) Avoid saying that a child was a mistake. No child is an accident. In his characteristic humour, Grave asked, “If it was an accident, did you call the police?” (5) Avoid being old fashioned. (6) Avoid confrontational meetings. (7) Avoid attacking actions, but rather attack the heart (Mark 7:21). (8) Avoid self-blaming. “Where did I go wrong? Is God punishing me for giving me such a child?” (Gen 4:1-2). (9) Avoid disunity between husband and wife in the instruction of children (Eph 5:31). (10) Avoid choosing careers for your children. (11) Avoid pride (Phil 2:3ff). 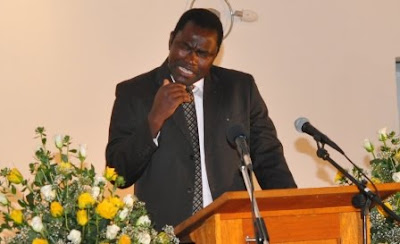 It was on that note that we ended this fourth day of the conference. The evening service was packed out. The bottom floor of the new Lusaka Baptist Church auditorium was completely full, and so some people had to sit on the balcony. We thank God for the numbers in attendance. 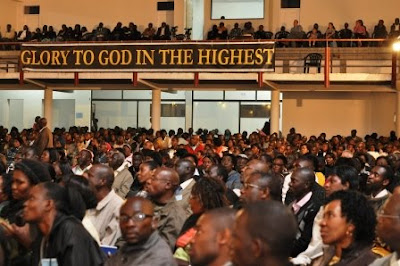 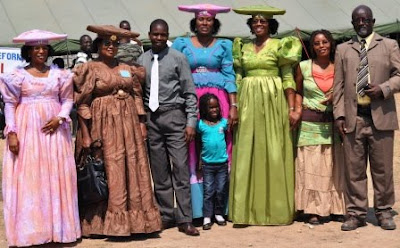