"Those who have been ransomed by the Lord will return. They will enter Jerusalem singing, crowned with everlasting joy. Sorrow and mourning will disappear, and they will be filled with joy and gladness” (Isaiah 51:11).

When I began to post recollections of past Reformed conferences in Zambia, I had hoped that I would do it in batches of five years. I managed the first ten years in two batches, but I failed to find the time to break the last nine years into two batches. So, here is their recollection in one serving! 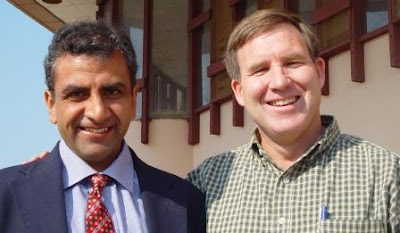 In the years 2000 to 2004 the Zambian Reformed Conference continued to use preachers from within the continent of Africa, except for the years when Bob Selph (2002, seen above with Sukesh Pabari) and the Ascol brothers (2003) came from the USA. The men God sent us, as you can see from the list below, were truly his choice servants and their ministries continue to ring in our minds and consciences.

In the years 2005 to 2008, God seemed to tap on the shoulders of our American brethren to come out to Zambia and help us. So apart from Ronald Kalifungwa, who at that time was still pastoring a church in South Africa, all our preachers crossed the Atlantic to come and help us. We owe an incalculable debt to these brethren. They set our hearts ablaze with the things most surely believed among us. The preachers and the topics for these four years are listed below. 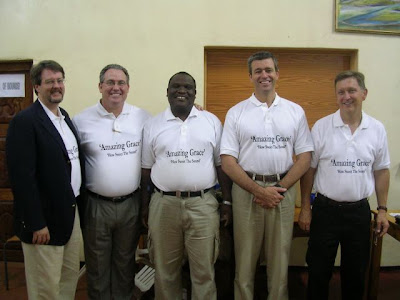 Our annual feast does not normally emphasise special music, though every year the Kabwata Baptist Church music ministry tends to have a special concluding song on the last night. However, 2006 and 2007 were exceptions. In the former, Todd Murray (wearing a jacket above) sang some of John Newton's less well-known songs each evening while sharing with us something of the life of John Newton. In the latter, Pam Noblit (Jeff's wife) sang a number of solos for us during the evening meetings. In 2007, we also had the Sola 5 conference back-to-back with our annual feast. Hence a conference that normally lasted four full days now lasted six. Also, many who came for the Sola 5 conference came early and so added to our numbers during the whole period. 2007 was also a special year because for the first time we had a lady speaker, giving special sessions to the ladies. Martha Peace (seen below with our bookstore manager, Kakonde) proved to all who were present why her books have become instant bestsellers. What an unforgettable experience that was! 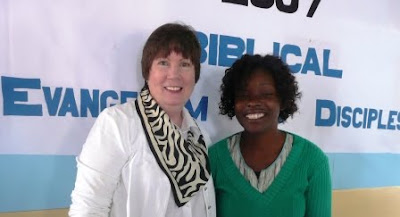 As we reach the 20th year of the Zambian Reformed Conference, one looks back and sees a number of changes in the Reformed (Baptist) movement in Zambia and the surrounding countries. When the conference started in 1990 it was novel to be Reformed and Baptist in these regions. That year, three of our churches adopted the 1689 Baptist Confession of Faith and stood out like a sore thumb among fellow Baptists in Zambia. That was then. Today, there are more than thirty churches in Zambia alone that have been planted in the intervening period and that lay a solid claim to the Reformed (Baptist) Faith. These churches see this conference as their rallying point. (Below is a picture showing some of the church leaders and their wives from some of these Reformed Baptist churches attending the 2003 Reformed School of Theology).

Another change is that when this conference started it was attended almost exclusively by youths and young adults from the few new churches in the country that dared to call themselves Reformed Baptist. That was then. Today, twenty years later, those youths and young adults are married, raising families, working in top management positions, raising a second generation of preachers, planting other churches, etc.

One more change is worth noting. When the conference started it was attended almost exclusively by Christians from Lusaka and the Copperbelt and when the numbers were around one hundred it was a very good attendance. That was then. Today, the conference attracts Christians from almost all the provinces of Zambia and almost all the English-speaking countries in Africa south of the Equator (as can be seen from the dressing of the Namibian Herero women below). Visitors from outside Africa are also not unusual. Last year, no less than twelve countries were represented at the conference! And as for numbers, we are hovering between six hundred and nine hundred people regularly. (Our biggest problem at the moment is to find a venue that is able to handle the current numbers for both accommodation and meetings).

Therefore, as we reach the 20th anniversary of this conference, we must raise our Ebenezer—“Thus far has the Lord helped us” (1 Samuel 7:12). We must thank God for a conference that has been our flagship and that has kept us together as one family for twenty years as we have grown in numbers. Praise the Lord! 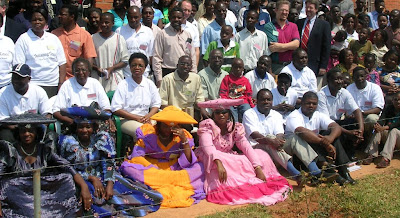 In a few days we will be meeting together from all over Zambia for our 20th annual feast, and it will be an all-Zambian panel of preachers. Ronald Kalifungwa has for many years privately complained to me about my absence on the list of preachers and so this year I have finally acquiesced and will be the main preacher together with Alfred Nyirenda. It is a daunting task that I have run away from for many years. Choolwe Mwetwa will be opening the conference and Ronald Kalifungwa will be closing.

This being the 500th anniversary of the birth of John Calvin, there will be a biographical sketch of his life also presented in the course of the conference. The electives in the afternoons will be handled by pastors who have laboured among us over the twenty years of the existence of this conference and they will be sharing with us issues that God has continued to burden their hearts about as they see the Zambian Reformed movement from the vantage point of twenty years.

Confirmed already are visitors coming from Namibia, Botswana, Zimbabwe, Malawi, Kenya, Sierra Leone, and Australia. We look forward to seeing all of you who have managed to find the time and money to travel to be with us. Those of you who are not able to do so—be assured we understand—we only ask one thing of you; that you will hold us up in prayer. Pray that God will meet with us! 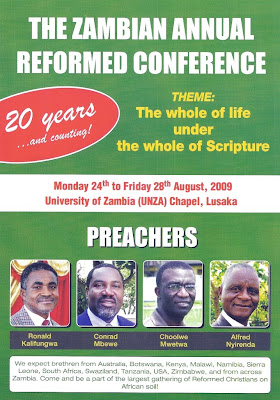 I know that the passage of Scripture I have quoted above talks about the final entrance of the saints in the glory that awaits us after the return of Christ. But do you not feel every Sunday when you gather with the saints at church something of the emotion in those verses? This sense is heightened even more when you meet saints who believe what you believe from every corner of the country and from other parts of Africa and the world. It is this emotion that the Zambian Reformed Conference evokes in our hearts as it comes round once a year. We anticipate this in the next few days. I say again, if you are unable to be with us, please pray that God will meet with us. Amen!

(I had asked in previous postings for recollections and photos of previous conferences. Please keep them coming! The more we can get the better. If you can’t post them on my blog, send them to tulip@iconnect.zm. Thanks!)

Posted by Conrad Mbewe at 12:30 PM 2 comments: Links to this post