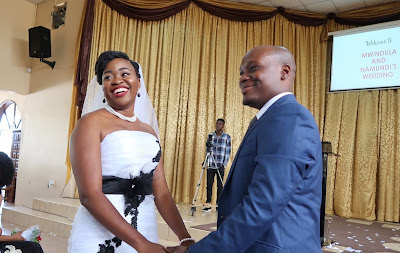 (My speech given at the wedding of our son, Mwindula, on Saturday December 23, 2017)

This speech is being given on behalf of my wife, Felistas, and myself. I've entitled it Déjà vu. Wikipedia says, “Déjà vu is from French, and literally means ‘already seen’. It is the phenomenon of having the feeling that the situation currently being experienced has already been experienced in the past.” (To avoid being long-winded due to excitement, I have written down this speech word-for-word, including this same statement!).

Felistas and I would like to thank you all—friends and relatives—for coming to this event.

Exactly 30 years ago—shy of ten days—on January 2, 1988, Felistas and I faced each other in front of Pastor Joe Simfukwe of Lusaka Baptist Church and exchanged our wedding vows. We did not know what lay ahead. I had just resigned my job as a mining engineer in Mufulira and answered a call to pastor Kabwata Baptist Church—a church which at that time had no church building, no pastor’s house, and not enough money to pay my salary. As Mwindula's mother often says, “There were only two things we were sure of: Conrad had a calling to pastoral ministry and I loved him. The rest was left to God.”

Well, this is now 30 years later, and apparently there is a Déjà vu. About ten years ago, Mwindula talked to us about wanting to become a pastor. We told him to first obtain a degree in something else, get a good job, and taste money. If after that he still wanted to become a pastor, he should come and tell us. Earlier this year, he came and said, “I have achieved what you wanted me to achieve. I have my degree in software engineering. I have a good job with Society for Family Health. I get a good salary. And I still want to be a pastor.” Who were we to refuse?

It was not long before he showed up again. This time he was with Namundi, saying this is the woman he wanted to marry. We asked the young lady—who is a lawyer—whether she knew the aspirations of her knight in shining armour. She told us what her former church elder, Mr Joseph Taguma, later repeated to us. She said that soon after her conversion, she had begun to pray that she would get married to a pastor. One or two courtships later she concluded that perhaps the Lord had other plans...until Mwindula showed up! She now thinks she is back on track.

The first time I met Namundi, I suspected we would meet again and would have a lot to do with each other. It was at a youth camp. She came to see me after one of my sermons, introduced herself, and we talked. A day later she came up to me smiling and said, “Pastor Mbewe, I'm sure you've forgotten my name.” She was right. I had been praying she would not ask. Well, she told me her name and then charged me not to forget it. Sadly, I forgot it again. So, the day the camp was ending, I pulled our daughter Mwila aside and, pointing to her at a distance, I asked for her name. “Namundi,” she said. This time I memorised it. The girl showed up at Kabwata Baptist Church (KBC) and looked me straight in the eyes and said, “Aha, what's my name?” This time, I was ready! That's how I knew we would have a lot to do with each other. She soon joined KBC and we discovered she was living a few streets away from our home. She got close to my wife as they began to have weekly meetings at our home just between the two of them. My son saw her and, as they say, the rest is history!

As some of you know, Mwindula joins our pastoral internship programme in the next two weeks as part of his preparation for a lifetime of pastoral ministry. To do so and at the same time bring a young lady into your life as a wife demands the best even from the best of men. Pastoral ministry puts you in the cross hairs of Satan’s most powerful weapons. The way ahead will be challenging but at the same time very rewarding. Felistas and I can testify to both those realities. That's part of the Déjà vu.

Mwindula and Namundi, any parent will tell you that it is their ardent prayer before God that their children may marry the way you have done today. We are very proud of both of you. Too many young professionals are simply starting to cohabit and before long you are told that there is a baby on the way. They lack the social safety net of family and the high rate of divorce bears witness to their folly. We are grateful to God that you have sought parental consent and involvement in your relationship and your coming together in marriage. That is how it should be.

Yet this is only the start of a journey. What matters is how you finish, which is obviously dependent on how you travel. The Bible begins in Genesis 1:1 with the words, “In the beginning, God created.” Among the many things he created was the institution of marriage. Therein lies the key to a successful and happy marriage. It is to follow what the manufacturer of the institution says. The manufacturer’s manual is the Bible. Follow what it says. He created marriage and so he knows best how to keep it in good working order.

Perhaps another interesting piece of the Déjà vu is the fact that the couple who did our premarital counselling were the Nyirendas—Pastor Alfred and Tina Nyirenda. Well, thirty years later they did the premarital counselling of Mwindula and Namundi—spanning two generations. We told the courting couple that the counsel the Nyirendas gave us has stood us in good stead these last thirty years. We are the proof of the pudding. Mwindula and Namundi told us that after about thirty hours of lessons, Rev Nyirenda said to them, “You can go and get married now. You are ready!”

Mwindula and Namundi, it is one thing to be taught how to have a successful God-glorifying marriage. It is something else to apply what you have learned. Many years ago we were called in to witness the separation of a couple in our church to ensure that violence did not occur as they divided their assets. We soon discovered that we were redundant. The couple knew exactly what belonged to whom, even to the last spoon. I asked them who their premarital counsellor was and they replied, “You!” I refused and said that I counsel couples to have joint accounts and purchase items from that common purse. That way everything is jointly owned. They just looked down. We told them that they had never really been married; they were merely living together.

So, Mwindula and Namundi, you have been taught how to have a successful God-glorifying marriage. Make sure you start putting into practice everything that you have been taught. You are meant to apply those principles for the rest of your lives together. Every year on our anniversary, Felistas and I pull out the headings of the notes we took down from the premarital counselling we got from the Nyirendas thirty years ago. We spend a whole morning going through them and asking ourselves in which areas we are backsliding. We are brutally honest with each other. Then we pray for God's help to make us better spouses and better parents. It has been a good method of ensuring we apply what we were taught. I commend it to you!

I am leaving most of the thanksgiving to Mwindula's grandfather, which he will give when he closes the whole event. Let me end by thanking the wider family and the Kabwata Baptist Church members for the role you have played in the lives of our children, and in this case in the life of Mwindula. As for the church, you know that he was born in this very church and has grown up to be what he is today because of the teaching and influence of many of you. Thank you very much. Pray for him as he goes into marriage with Namundi and in due season into pastoral ministry.

Let me end this Déjà vu speech by quoting an appropriate portion of the Bible. The apostle Paul upon surveying God's inscrutable ways, says in Romans 11:33–36, “Oh, the depth of the riches and wisdom and knowledge of God! How unsearchable are his judgments and how inscrutable his ways! ‘For who has known the mind of the Lord, or who has been his counsellor?’ ‘Or who has given a gift to him that he might be repaid?’ For from him and through him and to him are all things. To him be glory forever. Amen.”

(Postscript: Someone who attended our wedding 30 years ago reminded us later of another Déjà vu. Felistas and I provided a finger snack for our guests on the church grounds straight after our wedding ceremony instead of a full wedding reception. That is exactly what Mwindula and Namundi opted for. Déjà vu!)

Posted by Conrad Mbewe at 8:43 AM 4 comments: Links to this post