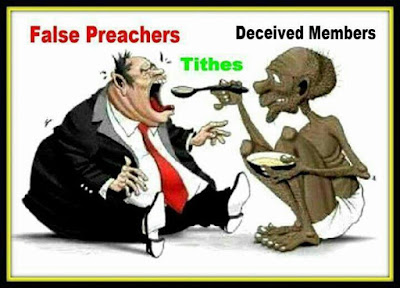 It is a well-known fact that state governments in Africa are deciding that enough is enough and are moving in to arrest the rot taking places largely in Charismatic churches. The stench cannot be ignored any more. This has already begun to happen in Kenya under President Uhuru Kenyatta. South Africa and Zambia are also preparing legislation. It will not be long before other African nations join in.

Why are national governments beginning to do this? It is because their citizens have been sexually raped and financially defrauded by men of the cloth with impunity and they can no longer look the other way. Sadly, this is also because they have noted with dismay that the church is doing nothing to arrest the trend.

I have my ears to the ground. After all, I live in Africa. I am hearing the church cry foul to the intervention of governments. The cry is that this is a form of persecution by the state because the church is expressing its misgivings about injustices being done by state machinery.

To some extent this is true. However, the question still begs to be answered. What is the church—especially the Charismatic church—doing to stop the rot that is taking place within its own ranks? I have my ears to the ground and can safely say that there is precious little being done about it. That is very sad.

Is it not obvious that the fountain that is gushing out this stream of imposters is the failure in Charismatic circles to regulate who should become a pastor? Pastors are appointing themselves and conferring on themselves titles like “apostle” or “prophet”. Anyone can put up a sign saying, “Signs and Wonders Church International by Prophet John Banda” and, hey presto, a church is born!

Is that not wrong?

Think about this for a moment. To be a president of a country, you must belong to a political party. To stand in national elections, a certain number of people should nominate you and you must pay a hefty amount of money. You must also undergo strict screening to ensure your character is impeccable. Then you must present yourself for elections. If you lose you cannot be a president. If you contravene the law you can be impeached by your party or by a court of law.

To be a doctor or an architect or a lawyer you have to go to school in that field for no less than four to five years. You then have to undergo internship under a seasoned individual in that career. You must also go through licensing examinations. If your mentor does not endorse you or you fail your licensing examinations you cannot be allowed to practice in that career. If you are ever guilty of professional misconduct your licence can be revoked.

Why are presidents and doctors and architects and lawyers subjected to such stringent measures? It is because of the many human lives that are likely to be destroyed if you have the wrong character in such practices. The president has the army and the police at his disposal. Imagine what he can do if he is the wrong character. Doctors look after our lives, architects design our shelters, and lawyers protect our freedoms. They can mess you up if they are charlatans.

Let us now look at pastors who look after the eternal well being of our souls. What does it take to be a pastor, especially of a Charismatic church? Nothing! There is no school that you need to go to. There is no official mentoring. There are no exams. All you need is a bit of eloquence, swag, and spring in your step. If you can throw in an American or Nigerian accent that will only be a bonus.

Thus we have individuals who have been total failures in every other area of life who are now making a living as Charismatic pastors. Some of them impregnated women outside marriage even before they became men of the cloth. They are already moral failures and yet they are now in pulpits teaching us how to live.

How are these charlatans managing to escape the dragnet despite having such a checkered past? It is simply by claiming that God spoke to them and told them to do what they are now doing. In Charismatic circles that claim seals the mouths of anyone who tries to prevent such an ignoble character proceeding to pastor a church. Who are you to prevent what God is doing in the life of his anointed one?

The only way we are going to address this flood of evil men and imposters filling the pulpits of the land is by a return to the Bible. What does the Bible say? For instance, how did the apostle Paul become a leader in the church? God spoke to him on the road to Damascus, but was that all? No, Paul himself states that he had to bring his credentials to the church leaders for them to give him the right hand of fellowship as a fellow minister of the gospel (see Galatians 2:1-9).

How has it been across history? Exactly the same! Pastors did not appoint themselves. They had to be trained under recognisable tutors. They had to undergo stringent exams on matters of doctrine. They had to undergo character assessments. Only when they had passed all these were they allowed to take “holy orders”. All this was being done to preserve the souls of the people who they would be overseeing. By claiming that God still speaks to us as individuals independent of Scripture, we have thrown all this away and now quacks are running and ruining churches. We have discarded the means to hem them in.

How you go in also determines how you go out. If other people appoint a pastor, when he messes up those people will defrock him. But if a pastor has appointed himself then the church becomes his personal possession. He is not accountable to anyone. He is untouchable. He can commit adultery and even divorce his legitimate wife in order to marry a sweet sixteen he admires in the pew and he still remains the prophet of the church. Who can dare to kick him out? He will tell you that if you do not want him you should be the one to go. This is his church!

Let us face it. We have failed to address this problem. If the state does not come in, this growing monster will consume the little that is left of the reputation of the church as a safe haven. It is no use crying out against the government for overstepping its jurisdiction if we ourselves who are the church are not addressing this stinking elephant in the room. Magistrates and judges are tired of handling cases of sexual defilement and financial fraud by apostles and prophets, which we are not addressing because we dare not “touch the Lord’s anointed”.

Every human being must be accountable to both God in heaven and humans on earth. Pastoral self-appointments must stop. If the church will not regulate who is allowed to become a pastor then let the state do it. For heaven’s sake, someone had better do it before the church becomes a laughing stock on earth and in hell!