“As they go through the Valley of Baca they make it a place of springs; the early rain also covers it with pools. They go from strength to strength; each one appears before God in Zion” (Psalm 84:6-7).

Matthew Henry, commenting on these verses says, “That they had a good will to the journey. When they were to attend the solemn feasts at Jerusalem, they would not be kept back by bad weather, or bad ways, nor make those an excuse for staying at home. Difficulties in the way of duty are designed to try our resolution; and he that observes the wind shall not sow.” That is what we found in Dubai. We found a family of Christians who did not make living and working in a largely Islamic country an excuse to hide their spiritual light and life. They continue to bear witness to the Saviour, Jesus Christ.

Felistas and I went for our first ministry trip to Dubai from Thursday 11th to Sunday 14th March 2010. We knew we were going to “the Shopping Mall of Africa”—if not of the world—because whoever heard that we were going to Dubai immediately asked what we were going to buy. Some even wondered whether we had joined the traders who go there to bring goods for resell in Zambia. Others immediately asked us to buy them various items while there. I mean, why else would anyone go to Dubai? So, not a few were shocked to discover that I was going on a preaching trip. “You mean, there are Christians in Dubai?” Yes, there are! And there are enough Christians to form churches. The United Christian Church of Dubai is a mega church.

In fact, this first visit to Dubai was in response to an invitation from the United Christian Church of Dubai (UCCD) for me to handle their annual men’s retreat. The arrival and departure times for this trip on Ethiopian Airways were not the most civilised. We arrived around 03.30 hours and found Richard Ngwisha—a Zambian who is part of the pastoral team of UCCD—waiting for us. By the time we cleared out of the airport it must have been around 05.00 hours in the morning. We could barely keep our eyelids apart! The moment we were shown our bedroom at Richard’s home, we did not waste a second but went straight to sleep until late morning. 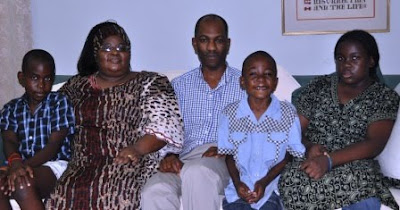 It was good to meet Richard’s wife, Catherine, and their three children (shown above). They must have also been very happy to see us because most of the weight we carried from Zambia to Dubai comprised various Zambian delicacies for their family. Although we had bought some ourselves in preparation for our visit, their friends kept bringing more and more as they heard about our pending departure. So, we were as glad to get rid of the weight as they were to receive it!

But, before we leave the subject of Dubai and traders, it is worth mentioning that when we changed flights in Addis Ababa, we immediately sensed that we had bade farewell to civilisation and good manners. The vast majority of the people that were on the flight from Addis to Dubai were clearly traders. There was very little respect for queues and for order. A number of them sat on seats that were not theirs and even immediately went to sleep across four seats. So, the air hostesses had their work cut out for them as they tried to bring sanity to the situation! 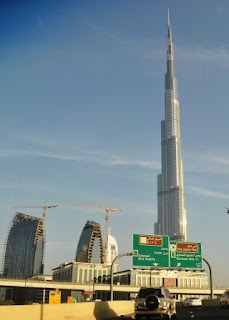 What struck me the most the moment we set our eyes on Dubai was the amount of infrastructural development that was taking place. To begin with, on every side one was struck by some of the best architectural buildings that one can find anywhere in the world. Then, it was the number of cranes I have never seen so many in my life. I mean, it looked as if every tall building had one on top of it!

My first assignment was in the evening on the same day we arrived (i.e. Thursday). It was an informal meeting around a meal with the church leaders and their spouses. I talked about the gospel-centred ministry that we have at Kabwata Baptist Church. Then the church senior pastor, John Folmar, interviewed me briefly before allowing the other church leaders to “grill” me with questions. It was a very relaxing evening and helped to ease me into the work that lay ahead for the weekend. It was good to meet Marc Glass and John from HeartCry Missionary Society in the USA. They are our chief partners in our work of missions in Zambia and had timed their visit to the Middle East to coincide with my visit there. I felt very honoured.

The next day was Friday but that was their “Sunday”. It was the day when everyone went to church or to the mosque. It was a rather strange feeling to wake up on Friday morning and see everyone heading out not to work but to their places of worship. The United Christian Church of Dubai has two services and meets in a building where two or three other churches meet. The building also hosts the Bible Society’s bookshop. So, it was quite an experience seeing so many people in one building but going into different churches. Richard had the unenviable task of introducing me to the congregation in both services. In his introduction, he reminisced about the “good old days” when we used to walk home together after church at Lusaka Baptist Church in the early 1980s. We lived in the same area. He recalled our singing hymns as we walked together and how we meditated on the hymns and the sermons we had been listening to. I was impressed by how much he was able to remember. 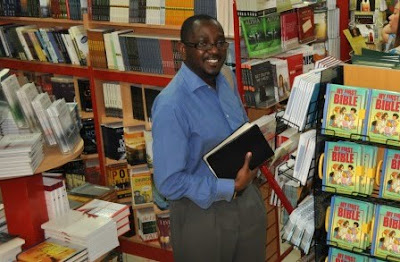 One pleasant surprise that day was meeting Martin Mweemba (seen above in the Bible Society bookstore), whom some former United Church of Zambia (UCZ) youths who are now in our Reformed Baptist ranks will recall. His wife is Isabelle. I officiated at his wedding some twenty years ago. He was now working in the United Arab Emirates. We spent the next day and a half together. What a pleasant surprise it was to meet him.

Off to the Men’s Retreat

Immediately after the church service, Felistas and Catherine (Richard’s wife) went with the kids back home while we drove off to Al Ain, where the men’s retreat was being held. It was a good 130 kilometres from Dubai. It was interesting to see how the landscape became nothing but desert as soon as we left Dubai. It was a quick reminder that as breathtaking as Dubai might be, it was built on sand. 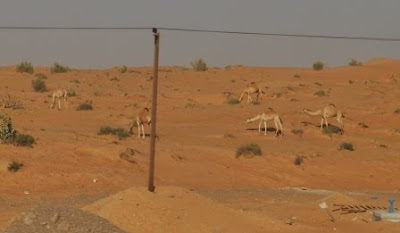 As soon as we arrived in Al Ain and checked into the hotel, I was ushered into the pulpit to begin my five part series of messages on 1 Timothy 3. I used this passage not as a list of qualifications for the office of elder but as a portrait of a mature Christian man. So, in the first session I dealt with the man himself as he stood in relation to his God. In the second session I dealt with the mature Christian man as a “one woman man”. After the second sermon, the men went into discussion groups. I had initially intended to join one of the groups but by the time I finished my second sermon I realised just how tired I was. So, I just sat around waiting for supper. After supper, we retired to our rooms for the night.

Saturday began with a brief session (shown above) by John Folmar where he dealt with the need for the men to enter into mutual accountability relationships that would become an informal network of discipleship in the church. It was certainly very appealing and gave me a lot of food for thought. I then handled my third session, in which I dealt with the man and his family. The men then broke off again into discussion groups. When they returned, I handled my fourth session, in which I dealt with the man and his work. This went up to lunch. In the afternoon I handled the fifth session, where I dealt with the man and his church. In each session my burden was to show what biblical discipleship meant in each of those areas. I trust that the men appreciated what they heard. In our last session, I was “grilled” with questions. It was on that note that the retreat ended.

Some shopping at last

With the retreat behind us, we drove back to Dubai. I was exhausted and so we spent the rest of the evening just relaxing at Richard’s home. By 21 hours, I realised that we were flying out that night and I had not participated in any serious shopping. How do you come to Dubai and not do some serious shopping? It is like going to the North Pole and not touching snow! So, off we went to a section of Dubai that was bustling with traders at that late hour of the night. It was like Kamwala at noon and on pay day for that matter. Richard was very handy. He assured us that the first price offered by the shop owners is not the last. You had to bargain and thus bring the price down. He said that the Nigerian traders were the best at bargaining. They can sit there the whole day until the price of the goods really comes down. Well, we did not have the whole day, and so we left it to Richard to do the bargaining for us—and he did an excellent job. We saw prices slashed down to the barest minimum. It was a fitting close to a brief and spiritually educative visit to “the Shopping Mall of Africa”.