The Zambia Baptist Historical Society has finally been launched

"Remember your leaders who taught you the word of God. Think of all the good that has come from their lives, and follow the example of their faith.” (Hebrews 13:7, New Living Translation).


20th March 2010 was very special to me. Tears filled my eyes as I saw all the Baptist associations in Zambia represented at the launch of the Zambia Baptist Historical Society. Many said that it was the first time in the history of Zambia for all the Baptist associations to come together in this way. The enthusiasm in the air was unquestionable. Baptists in Zambia want their history to be recorded and maintained for the sake of posterity. That was the clear testimony from the events of the day. 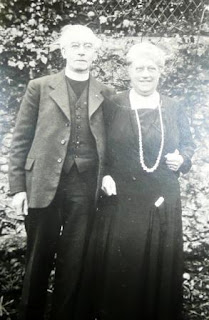 How did all this come about? It all started with the centenary of Baptist work in Zambia in 2005. Missionaries Henry Masters and Arthur Williams (seen here with his wife many years later) arrived in Zambia to establish the first Baptist mission in Kafulafuta in 1905. I was in South Africa in 2004 doing my first Masters’ degree when the General Secretary of the Baptist Union of South Africa (BUSA), Rev Angelo Scheepers, told me that they were gearing themselves to join the Zambian Baptists in their centenary celebrations the following year. Since Kabwata Baptist Church was not in any formal association at that time, I thought that explained my failure to know about this. I assumed that the news of such celebrations were commonplace among the churches that were in formal associations. I also assumed that someone was working on a book on Baptist history in Zambia.

As the year 2005 commenced I asked around and it became apparent to me that no book on Baptist history in Zambia was coming off the press. The closest was a small book that was written in South Africa by Dr Kevin Roy, a South African Baptist historian, which talked about the South Africa Baptist Missionary Society’s (SABMS) involvement in establishing the Baptist witness in Zambia. I decided if no one was going to do it then I would take this project upon myself. So, by the middle of the year 2005, I had written a forty paged booklet of the history of Baptists in Zambia. I presented this material at a special meeting hosted by Kabwata Baptist Church at the University of Zambia Christian Centre to mark the hundredth anniversary of Baptist work in Zambia. Later, I learnt that a much bigger meeting had been held at Kafulafuta Mission. It was humbling to know that the organizers of this event did not think that I was significant enough to be told about it! 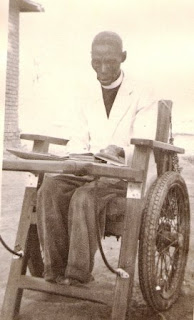 As I was working on my second Masters degree, I decided to do research on how much Baptists in Zambia knew about their own history. I did a questionnaire and distributed it among all the Baptist associations in the country to sample their knowledge. I found that the first fifty years were almost totally unknown and then in the more recent fifty years people only knew what was happening in their own small circle of churches. Clearly, something needed to be done to change this. During this research I travelled to Kafulafuta Mission for the first time and found the first Baptist church building in a sad state of disrepair. I asked to be shown the grave of the first indigenous Baptist leader, Paul Kasonga (seen here reading his Bible a few days before he died). I was told that it was not possible to reach the grave at that time of the year. After I persisted, I was taken there. What an experience that was as we made our way through elephant grass that was taller than us. At some point I waited while my guide, Rev Lydon Pensulo, looked around in the grass until he finally called out, “I have found the grave. Come!” (see photo below). 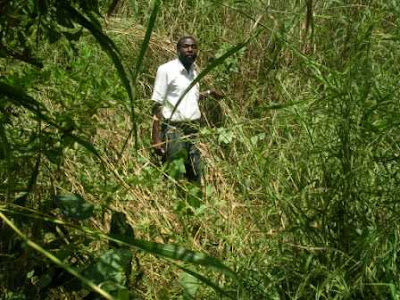 What I found there broke my heart (see photo below after we cleared the grass away from the grave). I thought, “How can we Baptists today be driving around in our 4x4s when the grave of our spiritual forebear lies in this state?” If I was a Charismatic I was going to say that it was God who spoke to me in an audible voice. Or if I was still steeped in African traditional religions I was going to say it was Paul Kasonga’s spirit that spoke to me. But I know that it was my conscience that smote me! 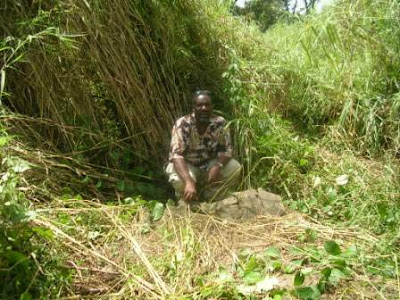 I returned to Lusaka and showed the photos of what I had found in Kafulafuta at the next inter-church elders’ meeting of the English-speaking Reformed Baptist churches in Lusaka. The whole place was silent when they saw the pictures. You could have heard a pin drop! The sad faces told me that the message had clearly registered on the consciences of all those who were present. One by one the elders said that we needed to do something about this. Paul Mumba (an elder at Lusaka Baptist Church), Charles Chilemu (an elder at Evangel Baptist Church), and myself, were tasked to provide leadership to the whole process of preserving Baptist heritage, especially at Kafulafuta. 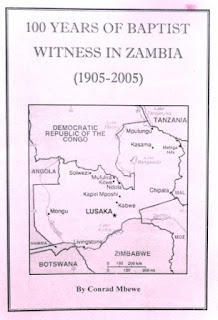 Kabwata Baptist Church dispatched a team, under the leadership of Logan Nyasulu, to go to Kafulafuta and survey the extent of the challenge on our hands. They did so and brought back a report with recommendations on how to register and maintain a heritage site. The Reformed Baptist Radio and Television Ministry turned my book (see photo of booklet) into a thirteen weeks radio series which was aired on national radio in 2007. We had hoped to also do a series on television and in the Post newspaper, but these two projects never took off. Thankfully, many people, especially those in Lambaland where Baptist work commenced, listened to the radio programme and started enquiring about how to preserve this history, naming individuals who had extra information.

Finally, it became evident that there were three things we needed to do. (1) Form a Zambia Baptist Historical Society and use this to bring all the Baptists interested in preserving our rich heritage to work together in this noble task. (2) Find a suitable site to maintain a Baptist Archives, where all Baptists would be encouraged to send their documents of historical significance. (3) Persuade the Northern Baptist Association to set apart the Kafulafuta Mission as a heritage site.

We asked the Baptist Theological Seminary in Lusaka, under the Baptist Fellowship of Zambia, if they could host the Baptist Archives and they readily consented. That was done! However, it was to take about two years to get ALL the Baptist associations in Zambia to endorse the Zambia Baptist Historical Society and for the Northern Baptist Association to set apart the Kafulafuta Mission as a heritage site for all Baptists in Zambia (below is the old and battered first Baptist church building as it stands today at Kafulafuta Mission). A few years ago they had almost lost the site to an American Baptist group and only managed to win the battle when the High Court ruled in their favour. So, we understood why they had to be very careful this time. They say, “Once bitten, twice shy”. Thankfully, by the end of last year, we had secured all the endorsements we needed and the Northern Baptist Association had consented to making Kafulafuta Mission a heritage site for all Baptists in Zambia. 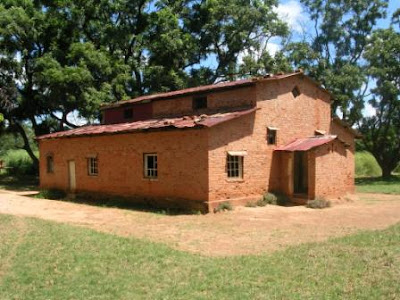 All that was now left was the launch of the Baptist Historical Society. The Lusaka English-speaking Reformed Baptist churches agreed to financially sponsor the launch and the Baptist Theological Seminary agreed to host it. We met with representatives of all the Baptist associations in Zambia early this year and agreed on Saturday, 20th March 2010, as the day for the launch. A working team was put together with representatives of each association so that none was left behind. (We later discovered that we had forgotten about the Mpongwe Baptist Association and we apologized to them. They were forgiving enough and sent a representative for the launch. Phew!!!). We asked each association to nominate two indigenous leaders to whom the Society would give a Certificate of Appreciation for their distinguished service among Baptists in Zambia during the launch (seen below as the certificates were being given out). 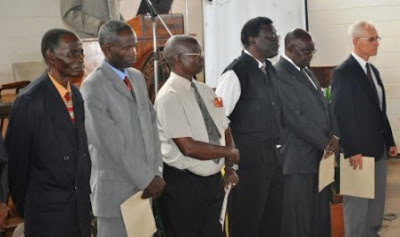 In the final week leading up to the launch, as if the Lord wanted us to know that he was aware of our plans, we were made aware of the presence of Pastor Joe Kapolyo (former pastor of Ndola Baptist Church and former chairman of the Zambia Baptist Association, and now pastor of Edmonton Baptist Church in England) who was visiting Zambia. We knew that with his profile he would make a perfect preacher for the day—all the way from England! When we discovered that he was in fact free on the day of the launch, we asked him to preach and he graciously accepted the invitation (see photo). 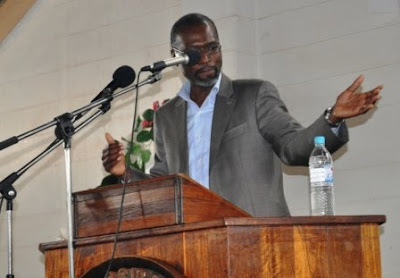 So, when 20th March finally dawned and Baptists of all shades and colours in their hundreds came streaming in from various parts of Zambia, I felt like saying with old Simeon, “Lord, now you are letting your servant depart in peace… for my eyes have seen your salvation.” The programme of the launch was quite simple. Apart from the praying and singing, I did a short powerpoint presentation of the first one hundred years of Baptist History in Zambia. Rev Lydon Pensulo spoke on behalf of all the Baptist associations to show enthusiastic support for the Society. The awards were given to the deserving indigenous Baptist leaders. Pastor Joe Kapolyo preached. Rev Franklin Kilpatrick (seen below with his wife, Paula, and arguably the longest serving Baptist missionary in Zambia), encouraged us all to pay the price in order to preserve our history as Baptists. The launch involved an initial paid membership drive, and many of those who were present signed up as charter members, with quite a number joining as life members. We ended the event with snacks which we ate together before we dispersed. So, believe it or not, the Zambia Baptist Historical Society has finally been launched! 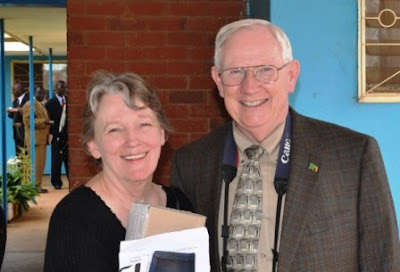 The challenge is now for us to hit the iron while it is still hot. We need to “remember [our] leaders who taught [us] the word of God. [We need to] think of all the good that has come from their lives, and follow the example of their faith.” This will necessitate commencing a Baptist historical journal which will be circulated in all our churches. It will also necessitate the encouraging of research in Baptist history in Zambia, especially by those who are doing theological training. The Historical Society should also encourage churches to include brief Baptist historical or biographical sketches when they are having conferences. We also need to start beefing up our Baptist Archives. All this will demand a lot of effort and finances. Pray for us as we begin this long but rewarding journey.