My first visit to the land of the Ethiopian Eunuch

“Now an angel of the Lord said to Philip, ‘Rise and go toward the south to the road that goes down from Jerusalem to Gaza.’ This is a desert place. And he rose and went. And there was an Ethiopian, a eunuch, a court official of Candace, queen of the Ethiopians, who was in charge of all her treasure. He had come to Jerusalem to worship and was returning, seated in his chariot, and he was reading the prophet Isaiah” (Acts 8:26-28).

On Tuesday, January 20, 2008, I arrived in Addis Ababa (which means “new flower”), the capital city of Ethiopia. I went with Wilson Kamanga, our church’s missions coordinator. We went to see how we could, as Reformed Baptists in Zambia, help with the Addis Kidan (which means “New Testament”) Baptist family of churches, which presently has about 65 churches. Most of these churches are south-west of Addis Ababa (see map). These churches have about sixty men undergoing modular-type training in Addis Ababa with a view that they should go into church planting across the country, depending of course on the final recommendation from the trainers.

Tragedy struck in January 2008. Amber died in a car accident in the USA on her way to collect Anthony from the airport.

How did we find ourselves crossing Congo DR, Tanzania, Kenya, and Uganda, to begin investigating this opportunity of ministry in Ethiopia? The story begins 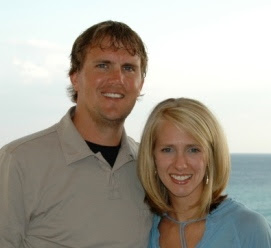 with an American couple—Anthony and Amber Mathenia—who went to Ethiopia in 2005 to help train church planters. Earlier they had worked on a short-term basis in Ethiopia for some seven years. After a while, feeling rather unhappy with the set up, they went back to the USA and returned in 2005 under the oversight of their own local church. They went back to the denomination they had been helping before and offered to help them train church-planters. That was how the training program mentioned above started. Tragedy struck in January 2008. Amber died in a car accident in the USA on her way to collect Anthony from the airport. (Anthony had remained behind briefly in Ethiopia to finish off some training sessions and was now coming to join his family). Anthony, who now had two children to raise as a single parent, needed help with the growing work in Ethiopia and was pointed to the Reformed Baptists in Zambia for that help. We gladly consented, hence this trip. As we arrived in Addis Ababa, we found Anthony with Kurt Strassner (pastor of Pleasant Ridge Baptist Church, Ohio, USA) training the church-planters. 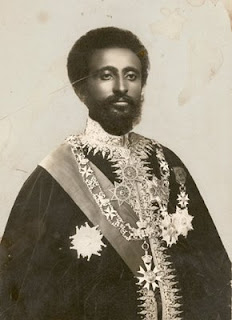 oldest independent country in Africa (independent for about 2,000 years!) and is the second most populous nation in Africa—second only to Nigeria. It has about 80 million people, i.e. eight times more than Zambia. And, like Zambia, it is also landlocked. Its national language is Amharic, though English is fairly widely spoken in the cities and is used in tertiary education. For almost half of the twentieth century Ethiopia was ruled by the famous Emperor Haile Selassie (1930 to 1974). He was overthrown by a military coup, which led the country into a period of coups, uprisings and serious refugee problems until 1991 when Mengistu’s regime was defeated and the new leadership brought in multi-party democracy in 1995. Droughts also took their toll on the country, which survives largely on agriculture. Since then the nation has been fairly stable, except for an international war (1998-2000) and tension with their neighbour, Eritrea, over the exact position of the border between them. All this has left Ethiopia as one of the world’s highly indebted countries, with 50% of the population living below the poverty datum line.

On a less political note, in Ethiopia they count years and hours differently from the Western world. In terms of years, they are now in the year 2002. So, just by being there, I was seven years younger! They also count their time as they did in the Bible—i.e. “at the sixth hour”, etc. So, when my watch was 11.00 hours, the clock on the wall said it was 05.00 hours. That was quite confusing. Wilson was told at the guest house that breakfast would be at 02.00 hours the next day and it sent him into total panic. He had never eaten breakfast that early in the morning. The lady in the guest house meant 08.00 hours our time! Coffee lovers will be pleased to know that coffee originated from Ethiopia.

Ethiopians are mentioned in four books of the Bible

Ethiopians are mentioned in four books of the Bible—in 2 Samuel 18, 2 Chronicles 14, Jeremiah 13, 38, 39, and Acts 8 (quoted above). So, they appear in the sacred pages many more times than we Zambians do! It is possible that the Christian faith first came to this place in the first century through the Ethiopian Eunuch, who was a treasurer to Queen Candace of Ethiopia (see text above). 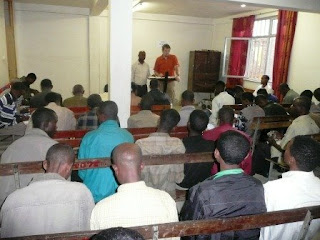 d our hearts immediately bonded. He shared with us his plans to move out of the capital and start having some of these teaching seminars in the more rural areas where most of the men come from. Taking the seminars where the churches are would mean that the church leaders would also be able to attend. Anthony felt that, with an increased number of workers due to our willingness to help, these plans could soon be realised.

On our first morning in Ethio 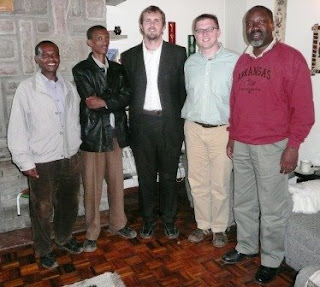 pia, we attended a morning of training sessions on the ordinances of the church (Baptism and the Lord’s Supper) conducted by Kurt. In the afternoon I was given an opportunity to ask the men to share with me the challenges they find in applying what they are learning in these training sessions in their churches. Listening to them sharing with me some of these challenges, helped me to know “where they are”. It was a very helpful exercise. I then shared with them on the essential ingredients of church reformation based on a bird’s-eye-view of Paul’s epistle to Titus. We then had two closed-door meetings with the leaders of the denomination, in which we talked about “the way forward”. The last of these two meetings was held the following day in the late afternoon (see picture above).

On the second morning of our stay in Ethiopia (prior to our second meeting with the denominational leaders), Wilson and I took time off to visit the Ethiopia Y 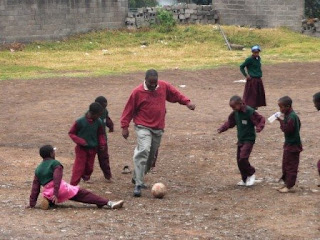 MCA. I am involved in the lives of many young people across Zambia through this movement, and so I love finding out how other national YMCA movements are meeting the social challenges of their young people. It was a very educative visit. I particularly enjoyed playing soccer with the children in the YMCA school for orphans and a bit of table tennis with their table tennis team (see photo).

As I close this blog entry my mind is drawn to three areas for prayer for the work that, God willing, we may find ourselves doing in the country of the Ethiopian Eunuch. The first is for the Lord to truly open a door for us to minister in that country through the Addis Kidan Baptist Church. The second is that those who learn the truths of Scripture with respect to biblical ecclesiology will be given wisdom and courage to apply the truths in developing truly biblical churches for the good of the people of Ethiopia and for the glory of God. Thirdly, that our hearts will be so united with the brethren of Ethiopia that the fruit of this fellowship will enrich our lives in both countries. I can imagine having brothers from Ethiopia coming to attend our Zambian Reformation Conference. What a prospect!

"I talked to my wife on the phone before boarding the flight but upon getting to the USA the next day I found that she had gone to be with the Lord.”

When we were hav 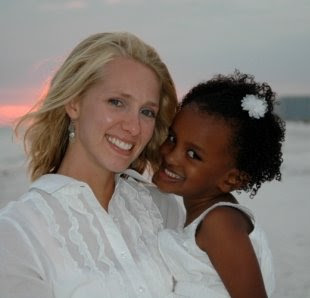 ing our last supper on Thursday evening, 22nd January, prior to our return to Zambia on Friday morning, I asked Anthony when his wife died. His answer moved me to the depth of my being. He said, “Today… last year. It was exactly the same experience I had this time last year. Just as I am having my supper with you before I get on my flight home tonight, I talked to my wife on the phone before boarding the flight but upon getting to the USA the next day I found that she had gone to be with the Lord.” Wow, what a parting of ways the Lord sometimes prepares for us—and how sobering! Anthony and Kurt flew to the USA that evening, and the next morning we also got on our flight for Zambia. Thus ended my first visit to the land of the Ethiopian Eunuch!

PS: The brother who drove us around the whole time we were in Ethiopia from the day we touched down at Addis Ababa airport on Tuesday night was Yoseph. We were told that he was getting married on Thursday and we were very happy for him. What surprised us was that the whole day Wednesday he was with us, driving us around and talking pleasantly about his wedding the next day. We even had supper with him late Wednesday evening in a local restaurant. On Thursday, when we went to the YMCA, we used a taxi because Yoseph was wedding—understandably. But listen to this! On Friday morning at about 07.00 hours, he came to the guest house, handled all our financial obligations, and drove us to the airport, telling us about the wonderful wedding he had the previous day. On the way, he pointed at a hotel and said, "That is where I spent the night with my bride. She is still there. I will come and join her after I drop you off." I had to be in Ethiopia because things like that do not happen in Zambia!
Posted by Conrad Mbewe at 9:06 PM

Email ThisBlogThis!Share to TwitterShare to FacebookShare to Pinterest
Labels: Itinerant Ministry, Other countries