Wherein Lies The Future Of Zambia?

“I am not ashamed of the gospel, for it is the power of God for salvation to everyone who believes, to the Jew first and also to the Greek” (Romans 1:16). 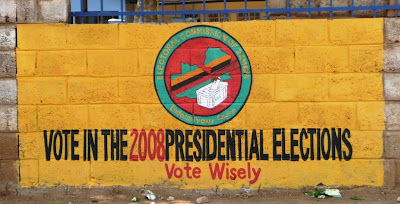 Yesterday, I cast my vote in the unscheduled 2008 presidential election. As a citizen of my country, I am now waiting patiently to hear what the collective decision of the people of Zambia is. In a few days time, we shall have a new president. He will either be the person I voted for or someone else – ouch! As I await the final verdict of the counting that has already begun, I must remind myself, as I have done so many times before, that the future of Zambia does not really lie in the ballot box but in the sovereignty of God and in the gospel of the Lord Jesus Christ. Due to space, I will be very brief in explaining what I mean. (I need to add that the posters scattered throughout this article are in alphabetical order and are not related in any way to the paragraph in which they are found!) 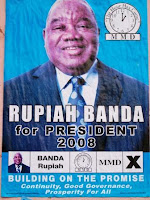 It is equally true to say that having a godly man of integrity on the throne can only be a blessing to the nation. It would mean greater investor confidence, more fiscal discipline in the public sector and more development for our nation. It would mean a better ambience for the church to carry out its divine mandate of evangelism and missions. So, it only makes sense that if there is such a person among the candidates vying for Plot One, then the hopes of the godly are that in a few days time such a person will be sworn in as Zambia’s fourth president. 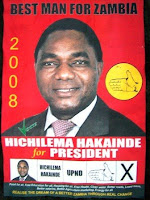 I can understand all that. However, we need to realise that ultimately the person who will be our president would have been chosen by God before time began. God is totally sovereign in this matter. He does not only choose the godly but even the ungodly in order to achieve his purpose at that time in history. Sometimes, he wants to bless a people and he gives them a righteous leader. At other times, he wants to judge a people and he gives them a ruler who will break their backs. Yet, this is never out of malice or caprice. At the centre of God’s purpose is the extension of his kingdom through the gospel. You will often find meaning to God’s acts in history by looking at the state of the church at that time. So, whether God gives us a good or bad president will depend on what he wants to do with us as his people today. 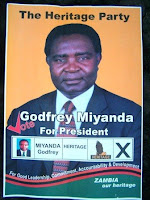 We also need to understand that for us to have better leaders in the nation the church must be faithful in proclaiming the gospel. The problem in the world is not bad economic policies but bad hearts and these can only be changed by the gospel, which is the power of God for the salvation of those who believe (Romans 1:16). The gospel has always been the vanguard of civilization and true human dignity. It changes lives in the grassroots of society and, since rulers come from there, in due season it gives us rulers with pure hearts. It is the failure to realize this that makes Christians excited about a new leader coming into power even when the state of the church still leaves much to be desired. That is totally misplaced confidence. Our excitement, rather, should be when a purer gospel finds its way into the homes of our land. That alone is the true hope of Zambia because it produces a righteous people. 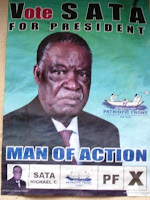 Does that mean we were wrong to vote? No, I think we should. God uses our vote to bring whom he pleases to Plot One. But we cheat ourselves if we think that there is a political leader who will bring utopia to our country. Politicians will promise us heaven, but they know that the promises they make are merely to woo voters so that they can get into their much-coveted positions of power. Once they get what they want, history will only repeat itself! Our hope lies in the gospel alone. Christians, even after casting our votes and waiting with bated breath for our new president to be announced, let us get busy with real gospel endeavours, praying that through them God will extend his kingdom in Zambia and even beyond. That is where the future of Zambia lies.
Posted by Conrad Mbewe at 2:54 PM