Pray for the Safety of our Pastors

“Strike the shepherd, and the sheep will be scattered” (Zechariah 13:7, ESV)

When I tell people that I hate travelling, they always laugh. I guess this is because my life has been lived largely on the road or in the air. But, seriously, I hate travelling. I have a phobia for travel. Hence, a week or two before a trip comes up, I already begin to experience stress-related symptoms. In fact, that is how I often realize that I have a trip around the corner; it is when I notice these symptoms and start wondering why. Then it hits me that I have a trip coming up soon. Our bodies are truly amazing. God wired them up in such a way that even when we are not consciously processing information, our bodies are still doing so – and even reacting to it. Amazing!

Now, why am I sharing my phobias with you? It is because in the recent past there have been a number of road accidents involving close ministerial colleagues. In fact, in the first case I was the driver! The accident took place in the last week of August as I was taking Pastor Voddie Baucham, our conference preacher, to our Zambian annual Reformed conference. Obstructed by a bus packed in the wrong place, I started driving across the road when a fast-moving car appeared from behind the bus and hit my car on the side. How my car only sustained a few scratches when the car that hit me was so extensively damaged (see picture) can only be attributed to the grace of God. It was a timely reminder that life is uncertain. You may be physically well now, but in the next moment you can be history! 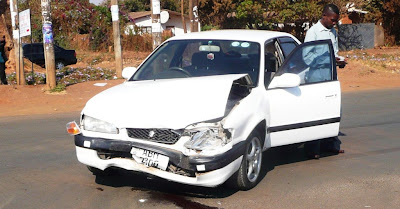 Then, about two weeks ago, Pastor Saidi Chishimba of Faith Baptist Church in Kitwe was also involved in an accident. He was taking his wife (with their two daughters) down to Livingstone to celebrate their seventh wedding anniversary. Suddenly, at a narrow bridge near Mazabuka, a truck-and-trailer, overtaking another truck, came into their lane at high speed. They just barely managed to get to the end of the bridge and veered off the road when the truck-and-trailer caught their car and ripped off the driver’s side (as can be seen on the picture, after some basic panel-beating). Saidi and Maureen, his wife, said that they were sure they were gone! They attribute their survival to the grace of God. After a rather lengthy delay, as they brought back their car to some working form, they continued the journey to see the mighty Victoria Falls. As they thought of the mighty power of God in creation, at the sight of the Falls, I am sure they also reflected on God’s mighty power in preserving their lives. 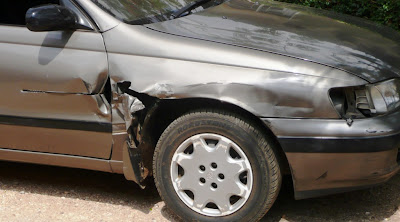 As if this was not enough, a few days ago I received the news that Pastor Wilbroad Chanda of Ndola Baptist Church was involved in a car accident in the USA and is presently undergoing surgery in order to repair various parts of his body. He had sustained a broken leg, a broken hip, some broken ribs, a broken nose, etc (see picture). Wilbroad is in the USA to do some coursework for a doctoral degree. He writes, “The accident occurred on Sunday after church between Vicksburg and Jackson. I was just alone in the car. I blacked out and careered off the road (Interstate/motorway) into the median, hit a few small trees and the vehicle stopped. I had my seat belt on. The paramedics arrived within 2 or 3 mins. I was in so much excruciating pain. I was told not to make any movements. I have never experienced any pain like that in my life.” Apart from asking that we pray for his healing, he also asks that we pray for the Lord’s provision in terms of “thousands of dollars for the medical bills.” (If you are able to help financially, please let me know and I will put you in touch with Wilbroad directly). 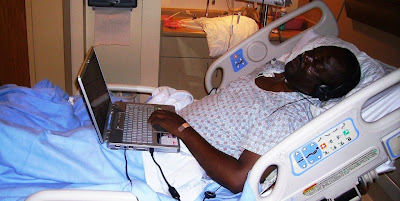 Pardon me for sharing all these gory details with you and for, probably, spoiling your day. I have done so because I want to ask you to pray especially for the safety of our pastors. I am not suggesting that their lives are more precious than those of other church members. However, I think that in the light of the three accidents involving pastors that have occurred in such a short space of time, with each event getting worse than the previous one, it only makes sense that I ask for prayer for pastors’ safety. Also, we have to bear in mind that our pastors are often on the road due to their call of duty. Every so often the phone rings and even before the person calling says anything about why they are calling, the very first words are, “Pastor, come quickly...!” – and we are back on the road! But one more reason for praying for the safety of pastors is the effect that the sudden loss of one pastor has on an entire congregation. The words of Scripture are often fulfilled: “Strike the shepherd, and the sheep will be scattered” (Zechariah 13:7, ESV). Once the person who regularly occupies the pulpit is no more, an entire epoch in a church comes to an end. So, for the wellbeing of our churches, let us pray for our pastors that the Lord will keep them safe on our roads. Amen!
Posted by Conrad Mbewe at 3:06 PM

Email ThisBlogThis!Share to TwitterShare to FacebookShare to Pinterest
Labels: Reflections