Jesus said, "All authority in heaven and on earth has been given to me. Go therefore and make disciples of all nations, baptizing them in the name of the Father and of the Son and of the Holy Spirit, teaching them to observe all that I have commanded you. And behold, I am with you always, to the end of the age" (Matthew 28:18-20, ESV)
The last one week has been full of kingdom-extending activities.
The Sunday following the Zambia Reformed Baptist conferences, i.e. Sunday 31 August, we had the ordination/induction of two missionaries at Kabwata Baptist Church (see picture below). Percy Chisenga and Oswald Sichula were set apart to plant new churches in Zomba (Malawi) and in St Bonaventure (south of Lusaka), respectively. Percy is a seasoned missionary and was used of the Lord to plant a Reformed Baptist church in Zambia’s extreme eastern town, Chipata, in the 1980s and 1990s. He has already been church-planting in Malawi for over a year under the invitation of the Maxson family from the USA, and so this “setting apart” was meant to enable him have ongoing support and also bring him into a biblical accountability structure under a sending church. Zomba is a university town and so Percy is targeting the Chancellor College students for much of his outreach work. Through this effort we look forward to seeing the establishment of the first Reformed Baptist church in Malawi. Oswald just completed his seven months internship program at Kabwata Baptist Church, having once briefly pastored a Baptist church in the northern suburbs of Lusaka. He is now set to commence a new work in an area where many of Lusaka’s wealthy people live and an area marked out for a major new housing project. Lusaka has a population of about 1 million people. The starting of the church in St Bonaventure brings the total number of Reformed Baptist churches in this city to ten! 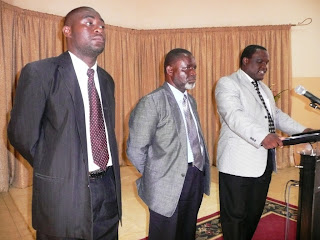 Then there was the Sola 5 conference in Cape Town, South Africa, from Friday 5 to Sunday 7 September. (Cape Town is, arguably, the most beautiful city in the world!) Sola 5 is an association of God-centred evangelical churches in southern Africa. It grew out of a desire by churches in the region to work together to support the work of God-centred, rather than man-centred, missions. It is only four years old and encompasses churches in most of the southern African countries. This association of churches certainly deserves a place in the hearts and prayers of those who long for true biblical spirituality in the churches of Africa. Their primary aim is to pool their resources together in the extension of the kingdom of God in the sub-region and beyond. In fact, during this conference they had reports from different countries in the region, and also from Romania and India. Kabwata Baptist Church had the highest number of delegates to this conference (apart from the host church, of course). There were about ten countries represented at this conference, mostly from southern African. A new steering committee was voted into office (see picture below). The theme was the five solas of the Reformation. Since I had to return to Lusaka before Sunday, I only heard the first two messages and preached on the third. I am told that Ronald Kalifungwa, pastor of Lusaka Baptist Church, closed the conference on a powerful note on Sunday evening, with Soli Deo Gloria! 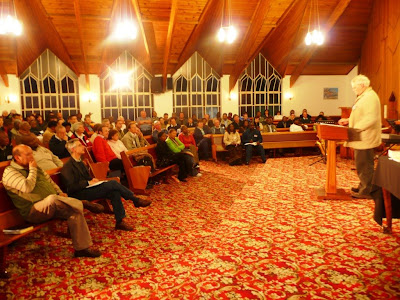 Last weekend, we had three elders ordained into the Kabwata Baptist Church eldership – Charles Bota, John Kumwenda and Eric Sinyangwe (see picture below). This brings the total number of elders in the church to six. Having just suffered the loss of one of the elders, Dr Simon Mphuka, through death, the church was full of praise to God for this addition. Simon’s widow, Lillian, told the new elders that she would send an e-mail to her late husband in heaven to let him know that in death he has multiplied himself into three elders! Ever since a multiple eldership came into being at Kabwata Baptist Church, this is the highest number of elders that have been ordained at once. With a membership now around three hundred and fifty, and all the ministries and mission stations that are under this church, many important issues were falling through the cracks. We are thankful to God for the three extra under-shepherds that the Lord has provided us. May this result in even greater exploits for God’s glory! 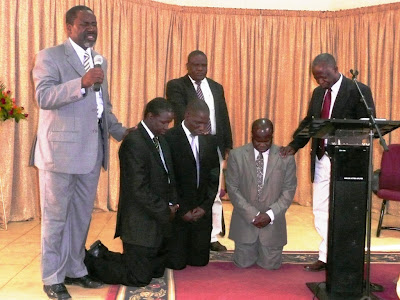 Finally, tonight I leave for Sierra Leone in West Africa to preach at the third Evangelical Minister’s gathering. Pray for me that the Lord will use me in a way that is beyond what I am able to ask or even imagine. Part of my journey in Sierra Leone is by helicopter. It will be the first time for me to travel in this way. I will let you know how the journey goes when, the Lord willing, I return to Zambia.
Posted by Conrad Mbewe at 2:02 PM