“But in your hearts regard Christ the Lord as holy, always being prepared to make a defense to anyone who asks you for a reason for the hope that is in you” (1 Peter 3:15, ESV). 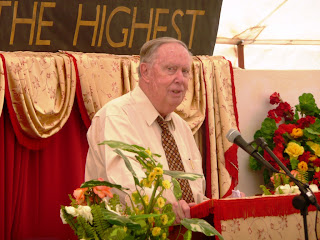 The annual gospel feast of the Reformed Baptists in Zambia has come and gone, and our hearts are full of praise to God for the gospel of our glorious God. The 2008 conference was held this year at Lusaka Baptist Church's "Tent of Meeting" from Monday 25 to Friday 29 August, 2008. Dr Jim Grier and Dr Voddie Baucham ministered to us on the subject of apologetics at a level that both young and old in the faith were able to relate to. Dr Grier proved to be a Bible encyclopedia on two feet as biblical history oozed out of him in his preaching and lecturing. Dr Baucham, who preached and lectured for us at this conference last year, showed that, like wine, he is getting better with each succeeding year.
The keynote speaker was Pastor Kennedy Sunkutu of Kafue Reformed Baptist Church. In a very brief message on the first evening he simply reminded us of the importance of apologetics in the life of ordinary Christians if they were to be effective in their evangelistic work. We also had three seminars repeated on two afternoons during the family conference. Ronald Kalifungwa (pastor at Lusaka Baptist Church) taught on the basic laws of logic, Alfred Nyirenda (elder at Mount Makulu Baptist Church) taught on intimacy in marriage, and Raphael Banda (pastor at Central Baptist Church, Mazabuka) taught on modesty and decency in dressing. While this was going on at the family conference, there was a Q&A session at the school of theology. Dr Voddie Baucham and myself were the panelists.
“Apologetics is knowing what you believe, why you believe it, and how to effectively communicate it to others.” That was Dr Baucham’s favourite line. In this way he reduced this big word into bite-size so that everyone could see that apologetics was relevant to them. The importance of a worldview to apologetics cannot be overemphasized. So, the messages of Dr Grier were calculated to help us develop a biblical worldview. Dr Grier took us from the foundational first chapters of Genesis all the way to the promises portrayed in the book of Revelation, showing us how consistent the Christian view of life was. He wanted us to learn to look at any one issue from the Bible in the light of the whole. While we were feasting on this, Dr Baucham was showing us from examples in the Bible how to give a reason for the hope that is in us. His final application of apologetics to the Christian family was the grand finale to the conference! 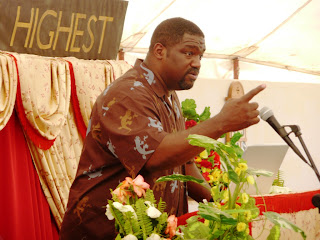 This year’s attendance was less than last year. One possible explanation was that last year’s conference also had the Sola 5 attendees in our midst. Also, this year it was not just the Lusaka attendees but also all who were from the major towns on the line of rail who were asked to pay in order to attend the conference. No doubt, this new measure knocked out a few people simply because for many years all those outside Lusaka attended the conference freely. The headcount on the last evening session showed slightly more than 600 people. The registration details showed that this represented sixty three churches and twelve nations. We were particularly encouraged by the fourteen brothers and sisters from America who came to attend our conference, most of whom came from Grace Family Baptist Church, Houston, Texas, where Dr Baucham is the pastor.
During the conference reports on a number of inter-church projects were given. We heard from the Zambia Reformed Baptist Building Trust Fund, the Reformed Baptist Radio and Television Ministry, the Reformation Zambia magazine, and the Reformed Baptist Preachers College. Through these joint ventures much was accomplished in the course of the year to spread the Reformed Faith. One highlight at this year’s conference was the launching of the Reformed Baptist Churches Association of Zambia (REBCAZ). This is meant to be a means of enabling all the Reformed Baptist churches in Zambia to work together in joint projects, without the association taking on a life of its own. Also on one of the evenings, three graduates of the Reformed Baptist Preachers College were awarded with diplomas in theology at a brief graduation ceremony.

Next year is the twentieth anniversary of the Zambian Reformed conferences. A lot has changed in the twenty years. Pastor Achille Blaize, pastor at Grace Baptist Church in East London, England, has accepted our invitation to come and preach at this historic conference. He preached at the very first Reformed conference in 1990, and so it will be interesting for him to come and see what has become of the seed he planted twenty years ago. Although the stream has not yet become an ocean, by the grace of God we are slowly but surely moving in that direction. To God alone be the glory. Amen!
Posted by Conrad Mbewe at 2:42 PM