A brief preaching trip to Namibia 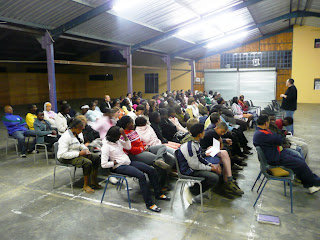 My first visit to Namibia was in 1994, i.e. fourteen years ago. I was invited to preach at a church leaders’ conference at Eastside Baptist Church, in Windhoek. Since then I have visited Namibia on preaching trips about once every two years and seen the work of the Lord grow from strength to strength. At one time, the Reformed Baptist movement in that country was a small stream but now it is slowly becoming a mighty river and I have no doubt that it will continue to grow until it becomes a glorious ocean. This time, I was invited to preach at the Baptist Youth Camp of Namibia (BYCN), hosted by the Reformed Baptist churches in that country. It was their third year of hosting this camp and it had about seventy teenagers (less than last year) from different churches and backgrounds. I preached three sermons on the subject of assurance of salvation from Romans 7 and 8. (The picture above shows Marinus de Bruijne, the chief organiser of the camp, giving some announcements). 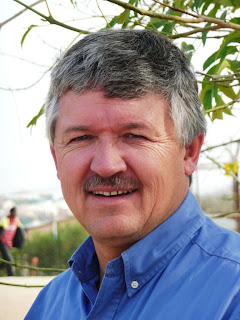 I would like you to remember two men, particularly, in your prayers because of the role that God seems to have given them in the work of Reformation in that country. The first is Joachim Rieck. He has been the pastor of Eastside Baptist Church since 1990. Joachim reminds me of Martin Luther not simply because he is German but because of his personality. He is an intense person who will not rest until what he has seen in Scripture becomes part of his life and the life of his church. Is this not what it means to be Reformed? Because of this, Joachim has naturally provided leadership to the Reformed movement in the Namibia. 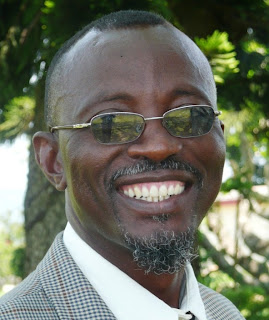 The second person I would like you to remember in your prayers is Laban Mwashekele. Until recently, Laban was the pastor of Monte Christo Baptist Church, a church he helped establish a few years ago. He is now concentrating on church planting, especially in the northern part of the country where 60% of the population of Namibia lives. Laban reminds me of George Whitefield. He is doctrinally solid and at the same time very evangelistic. He is all wind and fire, and he is ever on the move. He is a very effective preacher especially in his own mother tongue.


Perhaps let me end this brief report by adding to your prayer list the new Grace Reformed Baptist Church in Windhoek. Joachim thinks that although this is a very new work, it will be by far the most decisive work in taking the Reformed Faith to the next level of its indigenisation and growth in the country. We are presently working towards sending them a missionary pastor, hopefully by January 2009. Pray that the missionary pastor we will send them will get a work permit into Namibia and that funds will be found to keep him there until the church is able to fully support him.
Posted by Conrad Mbewe at 4:33 PM