What If Jesus Christ Had Not Died 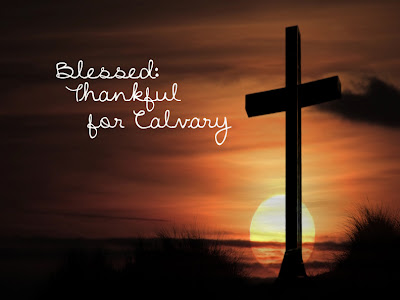 I got a gentle rebuke today from a couple in our church who are ardent followers of this blog. They asked me, "So, are we having any message from our pastor for Easter?" I told them that I would be preaching on Sunday. "No," they said, "on the blog!" I tried to assure them that I was working on something else, but they would not take anything other than something related to Easter. As I drove back home I thought they were right. Why would I want to talk about anything else when the whole world was thinking about the death and resurrection of our Lord? So, I have decided to post three daily articles that I wrote in 2010 for the Evangelical Action, a magazine of the Evangelical Ministries Trust of Australia. Here is the first one!

* * * * *
Every religion and great movement in history has had its symbol by which it has been easily identified. Islam has its crescent and star. Communism has its hammer and sickle. Nazism has its swastika. Christianity is no exception. Though in the early years Christians under persecution used the symbol of a fish to identify themselves to one another, it was not long before the cross took over as the chief symbol of Christianity. The cross became the chief symbol of Christianity simply because of the special place that “Christ and him crucified” has had in the hearts of Christians.

What is utterly amazing, however, is that the cross was the worst form of punishment ever invented by human cruelty. Here is a religion whose chief virtue is love. How does it take this most cruel form of punishment and use it as its chief symbol? The place of the skull was a killing field. How could any religion of love pride itself in such a place? It is this enigma that I hope to address.

THE APPARENTLY GOOD IDEA
It must be obvious to all of us that from a worldly point of view, Jesus should have come down from the cross to confound his enemies. Look at the taunting and scoffing that he had to endure. The Bible says, “Those who passed by derided him, wagging their heads and saying, ‘You who would destroy the temple and rebuild it in three days, save yourself! If you are the Son of God, come down from the cross’” (Matt 27:39-40, see also 27:41-44).

Why did he not come down from the cross and confound his enemies? After all he was the Son of God. He had the power to remove those nails from his hands and feet—Superman style—and beat all his enemies to a pulp. Why allow these evil men to take him to an early grave if he could help it? One imagines that if he had done so he could have drawn quite a following. That is what movies are made of. Hollywood draws millions of fans from across the world because of similar plots. Just when the enemies of the main actor think they have defeated him, then he returns and wins a resounding victory.

Hence, it looks like a good idea. Imagine how many people would have talked about the way Jesus surprised all his enemies by doing what no one had done before—climbing down from the cross and destroying all his enemies. Perhaps that is your thinking too. You read the account around the crucifixion of Christ and say to yourself, “What a wasted opportunity!” Since he is God’s Son, he should have used the opportunity to teach his enemies a lesson they would never forget.

DIAGNOSIS OF OUR PROBLEM
Anyone who thinks that Jesus should have come off that cross and destroyed his enemies has not diagnosed the human problem correctly. Jesus did not merely come to gain a following. He came to cure us of sin. I ask: How would his coming down from the cross cure all these ills?

Isn’t this the mistake politicians make? They rise to the throne on the wave of popular opinion, but fail to see that the chief enemy of their nation is not the other leaders but sin in human hearts. Hence, no sooner are they in office than they find that their nations are the exact opposite of the ideals they propagate or their followers soon discover that even those who are on the throne are selfish, greedy and evil. Then they start agitating for yet another regime change. The problem is not the people leading the nation. It is all of us. Our hearts are deceitful and desperately wicked (Jeremiah 17:9).

In Africa, we were convinced that the colonialists were the cause of all our misery. We chased them out of our land, and voted in our own African messiahs. Well, we soon discovered that they were equally selfish. Our African leaders have since plundered our national economies and stashed their ill-gotten wealth in American and European banks. By today, there is nothing but disillusionment all around us.

God’s wrath is being revealed by him leaving the human heart to wreck havoc. It is as if God is saying, “You do not want to acknowledge me. Fine, I will let your hearts go all the way down the sewer.” This is an aspect of God’s wrath that we so often overlook. It is represented in the phrase “God gave them over” (1:24, 26, 28). The sinful human heart has taken humanity into sexual immorality, homosexuality, and all the other vices that we see everywhere (see Romans 1:29-32).

This is the biblical diagnosis of our world’s ills. Any other diagnosis is too artificial to bring us to the right medication. Mere Superman-feats cannot heal such a disease. Orators cannot cure this disease. It needs an act of God. This is what the cross was meant to achieve—and indeed achieved.

JESUS CHRIST NEEDED TO DIE
We are now ready to get back to the cross. Why did Jesus not come down when everyone was taunting him and challenging him to do so? It was because he knew that unless human hearts are cured of sin, the same people who would follow him today would turn against him tomorrow. It would be for purely selfish reasons that they would follow him. He had to find a cure for the hearts of men and women which were deceitful and desperately wicked, and that cure was with God.

Thus, Jesus remained on the cross because his primary focus was to pay the price for sin and thus reconcile God to us. The Bible says, “For all have sinned and fall short of the glory of God,  and are justified by his grace as a gift, through the redemption that is in Christ Jesus” (Rom 3:23-24). On the cross, Jesus was buying us back to God. He was satisfying the demands of justice so that the God who is against us can—by grace—become a God who is for us. Thus, with this change, God could then give his Holy Spirit to Jesus Christ upon his ascension to heaven. And it would be this Holy Spirit who would change our hearts so that we would stop being lovers of self and sin, and instead become lovers of God and holiness. That was why Jesus stayed on the cross until he breathed his last and died.

Do you see why the cross is so precious to Christians, despite its cruelty and ugliness? Do you see why it has become the chief symbol of our religion? It is because through the death of Christ our sins have been paid for, the wrath of God has been appeased, and the Holy Spirit has been sent into the world to change our stubborn hearts. Thank God, Jesus never listened to the people who were taunting him. Thank God he never came down from the cross. Thank God he remained focused on the real issue.

(Look out for PART TWO tomorrow!)
Posted by Conrad Mbewe at 6:23 PM