Redeemed From The Curse Of The Law 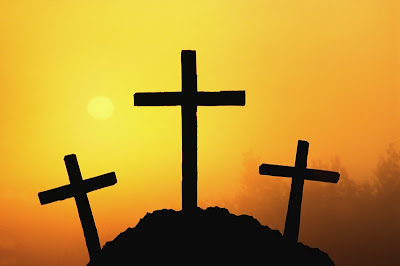 “Christ redeemed us from the curse of the law by becoming a curse for us—for it is written, ‘Cursed is everyone who is hanged on a tree’” (Galatians 3:13). In this third and final blog post on the subject of the cross of Christ, I want us to take a fresh look at this New Testament passage and see what light it sheds upon the cross of Christ to make us understand it better. What is Paul saying in this passage?

JESUS CHRIST REDEEMED US
To begin with, we must always understand the death of Christ on our behalf as a form of redemption—a buying back! His death was the payment being made in order to buy us back to God. Sin against God is a debt that must be paid by eternity being spent in hell. It is a debt that we could never pay because all our acts are as filthy rags before God. In other words, they are tainted with sin and only make our debt worse. Someone else needed to make the payment for us—someone who himself did not owe God and his law this debt. There was none good enough in heaven, on earth, or under the earth, except God himself. Thus the Bible records that “God so loved the world that he gave his one and only Son, that whoever believes in him should not perish but have everlasting life” (John 3:16). Jesus alone was good enough to pay the debt and redeem us. As one famous chorus used to say,

“He paid a debt he did not owe; I owed a debt I could not pay,
I needed someone to wash my sins away;
And now I sing a brand new song, ‘Amazing grace!’
Christ Jesus paid the debt that I could never pay.”

And, what a price was paid for us—not that of an ordinary human being, nor that of an angel, but that of the very Son of God. Priceless! This is the value that God has placed upon your soul—the life of his own dear Son. Is this the value that you have placed on your own soul?

FROM THE CURSE OF THE LAW
We also need to understand what Christ has redeemed us from. Many people look at the cross as though Christ was paying to the devil in order to set us free from his bondage. That is very far from the truth! According to this passage, Christ redeemed us—bought us back—from the curse of the law. What does that mean?

To understand this we must first understand what a curse is. Let me give you my own “working definition” of a curse—nothing like what you would find in the Oxford and Webster’s Dictionary! A curse is a form of miserable and painful bondage that you are trapped in. You try to come out of it but you cannot. We often look at a person who has tried to maintain a happy marriage but totally failed and is now in his fifth or sixth marriage and we say, “He is cursed.” A man who has tried his utmost to get the best crop out of a piece of land by putting in the best fertilizer and using the most skilled manpower but made a loss each year will say, “This land is cursed.” (Though most likely his neighbours will say that he is cursed). In each case, the individual is unhappy and feeling frustrated because he is trying to change his circumstances for the better and completely failing. He seems destined to fail!

That is the curse that God has placed upon the human race after Adam sinned against him in the Garden of Eden. You will recall the words of God to Adam in Genesis 3:17-19. This is the miserable and painful bondage in which we are trapped by the curse of the law. The ultimate frustration is not even the physical death referred to in this passage, but the eternal death in the Lake of Fire that is taught very clearly towards the end of the Bible.

BY BECOMING A CURSE FOR US
But how exactly did Christ redeem us from the curse of law? This is what Paul ends with in the text we are examining. He says that Jesus Christ achieved this by becoming a curse for us. That is a very strange way of putting his thoughts across—“becoming a curse for us.” What does he mean by that?

Paul does not mean that Christ became yet another source of misery and pain for us as human beings. Rather by “becoming a curse for us” Paul means that he suffered the curse of the law for us. Unless you understand the death of Christ that way, you have not understood what transpired on that cross when Jesus Christ hang there and died.

When Jesus Christ went to the cross he went to suffer and die for sin. He told his disciples over and over again that “he must go to Jerusalem and suffer many things from the elders and chief priests and scribes, and be killed, and on the third day be raised” (Matthew 16:21). Yet, death had no claim on him because he was totally righteous from birth, and so the only explanation of Christ’s suffering and death was that it was done in the place of others. In other words, he suffered and died as our substitute.

The apostle Paul explains this great substitution in this way: “For our sake he made him to be sin who knew no sin, so that in him we might become the righteousness of God” (2 Corinthians 5:21). In other words, God transferred the guilt of our sin to the account of his eternal Son and punished him just as if he was the one who had committed all our atrocities. Thankfully, Jesus did it in such a way that God the Father was fully satisfied. Hence, three days after he died, the grave could not hold him any longer and he rose from the dead. The full price had been paid.

Isn’t it amazing that all this was foretold in the Old Testament to the minutest detail of Christ’s suffering and death. The apostle constantly went to these documents to show that this was no afterthought on the part of God. He had foretold this many centuries earlier. “For it is written, ‘Cursed is everyone who is hanged on a tree.’” Jesus die not die from a disease. He was not starved to death. He was not wounded by a spear or an arrow. He was crucified just as God had foretold. He is, therefore, the long-expected Messiah who was coming to deliver his people from their sins.

If the Jews had read their Bible carefully, they would have seen testimonies that the Messiah was coming to die and through his dying in their place he was going to save them. Yet, this message is not for Jews only. If you trust in Jesus Christ and his finished work on the cross, you too are able to experience freedom from the curse of the law. You too will experience the blessing of Abraham, which flows to the Gentiles as well through the Holy Spirit.

Have you come to Christ for salvation yet, trusting solely on his finished work of redemption on the cross? Never try to please God by obeying the law, because that is a dead end. If you try that route, you will only go to hell. Stop trying and start trusting. Trust in the suffering, substitution and satisfaction of Christ. “Christ redeemed us from the curse of the law by becoming a curse for us—for it is written, ‘Cursed is everyone who is hanged on a tree.’”