Preaching at the Encontro de Fa Reformada in Brazil


The beginning of November found Felistas and me in Brazil where we still are. I am preaching at the 12th Encontro de Fa Reformada conference at the Igreja Presbiteriana Nova Cidade (New City Presbyterian Church) in Manaus. 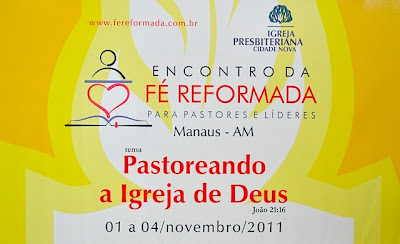 I reported on my last preaching trip to this conference in 2008 on this blog (click here). This is probably my fifth visit to this conference, which I had the pleasure to be a part of at its commencement in the year 2000. During my last two visits, it had grown into two conferences in Manuas and Gioania. I was pleasantly surprised to find that the conference is now in seven to nine cities, covering a fair section of the northern part of this vast country.

Solano Portela (who always interprets for me at these conferences) preached on “Pastoring in a World of Darkness”. It is clear that much thought is put into the breakdown of the theme of the conference. Pastor Jaime Marcelino is a very meticulous planner. I was not too surprised when I learned that he was trained as a Civil Engineer. The preachers also do a very good job in sticking to their topics. Yours truly dealt with “Pastoring the Pastors”.

Part of the headache of organising a conference in Portuguese with a few of your preachers being English speakers is how to get them to listen to the Portuguese preachers. Pastor Jaime insists we benefit from the sermons too. In most countries, this is solved by putting the foreigners at the back with someone whispering into their ears in a language they can understand. That is not the case here. Solano’s wife, Betty, types out the sermon while it is being preached and Felistas and I sandwich her between us so that we can read what is being said.

This year, she had the extra task of translating for the Tripps. One way would have been to have them sit behind her while craning their necks in order to see what she was typing on her laptop. Instead, she connected her MacBook Pro to her iPad in such a way that whatever she was typing on her MacBook was automatically being seen on the iPad. So, Tedd and Marg sat comfortably on their pew and “listened” to the sermon in English. Marvelous!

The week was also spent enjoying Brazilian hospitality. We stayed with Pastor Jaime’s family (as we always do) and savoured every moment. Mrs Fransisca (Pastor Jaime’s wife) goes to town to make sure you eat the very best of Brazilian delicacies. With Felistas sitting next to me, I cannot indulge too much. However, I make sure that I leave enough space for the desserts. They are just delicious!

During the conference, we also went to other homes for our lunches, together with the other preachers and their hosts. Included in this entourage was a brother from Angola, Antonio Mussaqui, who also attended the conference.

What the Brazilians fail to achieve because of the language barrier, they certainly make up by their warmth and friendship. It is as if you are still in Africa. Of course, their hugs are a trademark that we cannot match up to.

I have been asked to return in 2014 in order to celebrate with the brethren here the 15th anniversary of the Encontro de Fa Reformada conference. That year the FIFA Football World Cup will also be held in Brazil, with some of the matches taking place in Manaus itself. I am scratching my head to see how I can kill two birds with one stone and I have three years to figure it out!