In Honour of My Mother—Claire Linda Mbewe

“Her children arise and call her blessed; her husband also, and he praises her: ‘Many women do noble things, but you surpass them all…’ Give her the reward she has earned, and let her works bring her praise at the city gate” (Proverbs 31:28-31). 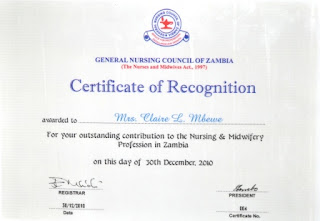 Although this blog is finally only being posted on January 1, 2011, it was conceived in my soul on December 31, 2010. This was because, on the previous day (December 30), I was asked to receive a certificate of honour on behalf of my mother at the 40th anniversary celebrations of the General Nursing Council of Zambia at the Mulungushi International Conference Centre here in Lusaka. As the thoughts ignited by this award-giving ceremony brewed in my soul, I felt compelled to put pen to paper and express them through this blog. This blog, therefore, is not primarily about my mom as a wife and mother in the home—that would need another blog entry to deal with—but about her as a nurse and the impact her nursing career left on me, on my siblings, and on the nation of Zambia.
Perhaps the best place to begin is with a book that was very famous in our country in the early 1970s. It was entitled Who's Who In Zambia and was published in 1968. In the introduction, the editor wrote, “In the compilation of material for Who's Who In Zambia, the aim has been to include the names of the best known men and women in all spheres of constructive achievement. Some have been selected on the basis of outstanding personal achievement in their particular vocation while others have been included on the basis of their position....” (K. G. Mlenga, Editor). One individual in this book who answered to this description was:
“MBEWE, Mrs. Claire Linda - State Registered Nurse & Midwife; Acting Matron, Lusaka Central Hospital. Previously - Nurse, Ndola Hospital, 1958-60; Balovale Hospital 1962-64; Sister-in-Charge, Lusaka Hospital, 1966-67. Born 23.12.33, Mbereshi Mission, Kawambwa, Luapula Province. Studied at Mbereshi Mission, Mindolo Girls' School; Tiger Kloof Institute (Cape Province, S. Africa - Matriculation); McCord Zulu Hospital (Durban - SRN & SCM). Married Benson Evans Mbewe 7.7.60. Three children - Thamara Mwape, Conrad Chanda, Irene Mukalo.”
My mother, Mrs Claire Linda Mbewe (neé Kawandami), found herself in this book because she was a pioneer of nursing in Zambia. When she commenced work in 1958 in Ndola she was only the second professional nurse in Zambia. She graduated in South Africa as a Registered Nurse after a Mrs K Sikota, the first Zambian Registered Nurse, who preceded her six years earlier in 1952. At the University Teaching Hospital (called ‘Lusaka Central Hospital’ in the short biographical sketch above), mom worked as Senior Nursing Officer, which was the top nursing position in the whole hospital. She moved to the Ministry of Health in 1969 and became the Chief Nursing Officer in charge of all nursing services in the nation. When she died, at the age of 37, she had just moved to Cabinet Office. She went to her reward still young and full of zest.
Why did the General Nursing Council (GNC) give mom an award almost forty years after her death? Well, there is no doubt that she played a very significant role in the establishment of nursing in Zambia. But more than that, when the GNC was formed by an Act of Parliament in 1970—giving nurses a distinct legal place in health care—mom was in charge of all the nursing services in the nation. So, there is no doubt that she played a vital and pivotal role in its establishment. A year after her death the Zambia Nurses Association (now called the Zambia Union of Nurses) erected her tombstone, showing the high esteem that mom enjoyed among the nursing fraternity in the whole country at the time of her death.
The day after her burial, on Friday, 5 November 1971, The Daily Mail wrote on its front page:

“Mrs Mbewe – ‘Shining example to Women’ More than 300 people, including Cabinet Ministers, the Mayor of Lusaka Councillor Fleefort Chirwa, and top government officials attended the funeral of Mrs Claire Mbewe, former matron of the University Teaching Hospital, who was buried at Leopards Hill Cemetery yesterday. Mr Lewis Changufu, Minister of Home Affairs told the graveside mourners that Mrs Mbewe remained a shining example among the women for her contribution to the development of Zambia. Mr Changufu said that if Zambia was to advance it must produce women of Mrs Mbewe’s calibre. She was dedicated and helped to educate many other Zambians in the nursing profession. He said that she was responsible and trusted, and she had worked as hard as a man. He added that it would be difficult to find a replacement for her.”

When mom died, I was only nine years old. I did not understand what death was. To me, she had gone on a long journey and would return one day. Well, this year (2011) marks forty years since my mother went on that journey—and she has not returned. Being almost fifty years old now, I now understand that she will never return. Rather, I will go and join her very, very shortly.
I said that I was only nine years old when my mother died. I have one negative recollection of her as a nurse—only one. It was the times she gave me injections when I was ill. I recall once telling her in between sobs—as I kicked and screamed—that I would never fall sick again if she desisted from giving me an injection. I do not think she took my promise seriously because she still went ahead and pricked me with it, while dad held me down on the bed. Forty years later, I still hate those injections! 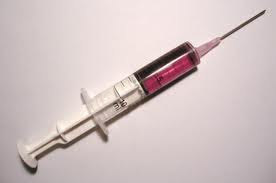 One more matter needs mentioning in this blog written in honour of my mother. It was because of mom’s passion for nursing that her surviving siblings and children felt obliged in 2004 to introduce the Claire Linda Mbewe Memorial Award which is given to the most deserving graduate of the Lusaka School of Nursing each year. Whereas it competes favourably with one or two other awards as far as prize money is concerned, it is presently the most coveted trophy because it is the only floating trophy that has a miniature trophy which the recipient keeps.
We also provide a one paged laminated biographical sketch of mom’s nursing career to the recipient. Our desire as a family is that newly qualified nurses starting the journey that mom once trod with this award in their possession would find in her example a role model to emulate until God also calls them from this life. As a family, we felt that this was the least we could do in honour of this pioneering woman who blazed a trail for professional nursing in Zambia. Indeed, “[we] arise and call her blessed..., and [we want] her works to bring her praise at the city gates.” Amen!
The impact of mom’s nursing career is still evident in the family. My elder sister, Dr Mwape Kabole, who is a Consultant Paedriatrician, presently practicing in England, was only eleven years old when mom died. Yet she testifies that she took up medicine as a career primarily because of mom’s example. I also seriously considered a medical career but the sight of blood still gives me the creeps. We spent long hours with my elder sister, as she assured me that you soon get used to it. In the end I took up Mining Engineering because rocks don’t bleed! However, all was not lost, because when I met a nurse with godly virtue (Felistas) soon after graduating from university, I married her!
Posted by Conrad Mbewe at 8:15 PM