"Worthy are you, our Lord and God, to receive glory and honour and power, for you created all things, and by your will they existed and were created" (Revelation 4:11).

Today’s meeting started at exactly 10.00 hours. The Zambian delegation (seen above) just began singing “And can it be” a few minutes prior to that time, and others joined in. When the song was finished, Brian Stone (the Pastor of Emmanuel Baptist Church in South Africa) stood up and put his hands on the shoulders of Kennedy Sunkutu (the Pastor of Kafue Reformed Baptist Church in Zambia) and announced to all of us, saying, “When I get to heaven, I want to live on the same cloud as this brother just because of his wonderful singing!” 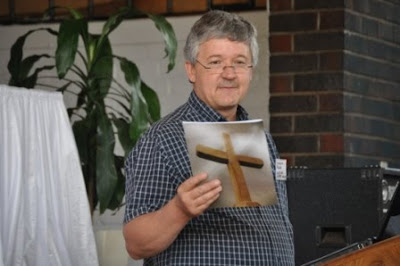 Joachim Rieck, the Pastor of Eastside Baptist Church in Namibia, led us in prayer and read the whole of Revelation 5. We then all joined in singing the chorus, “Thou art worthy” based on the passage quoted at the start of this blog. He then gave us a missions report on Namibia, covering Ovamboland and the Herero people. He also talked about a magazine they were now producing in Namibia (see photo above). Joachim mentioned other areas that they were burdened about, such as the Nama-speaking people, Angola, Germany, etc. 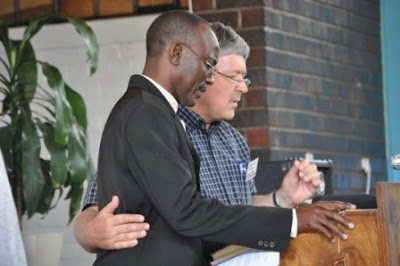 Joachim invited Laban Mwashekele, the pastor of the Monte Christo Evangelical Baptist Church in Namibia, to come forward and he prayed for him (see photo above). Laban proceeded to preach on the subject of “The Successful Nature of Christ’s Work”. He drew our attention to the two natures of Christ—lion and lamb, God and man, King and servant. He divided his sermon into two parts: The sight and the song!

The sight: “And one of the elders said to me, ‘Weep no more; behold, the Lion of the tribe of Judah, the Root of David, has conquered....’ And ... I saw a Lamb standing, as though it had been slain” (Rev 5:5-6). A lion speaks of strength and conquering. Jesus is the promised Messiah who has been given all power in heaven and on earth. Yet, he has conquered not by might but by his own blood. Hence, he is also described as a lamb. Having died and been raised from the dead, he went into heaven to be made king and to receive the blessed Holy Spirit. The Lamb who saved you by his death is now the Lion who protects you by his life. 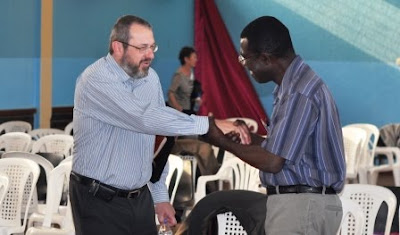 It was with those words that Joachim came forward and closed the morning session, and we went for lunch. As usual, such breaks provided friends the much-needed opportunity to get together and chat, as can be seen from the two friends above! The Steering Committee had a quick meeting after lunch. Christo Beetge was re-elected as chairman. The 2011 Sola 5 annual conference was scheduled for 1st to 4th September in Livingstone. 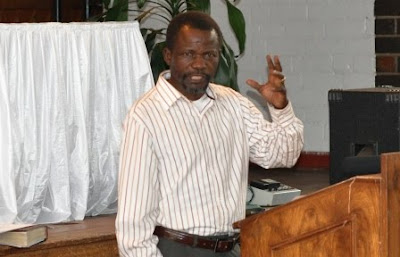 We recommenced our meeting at 16.00 hours. Brian Stone, the Pastor of Emmanuel Baptist Church in South Africa, asked the now famous singer of hymnody Kennedy Sunkutu to start “A Debtor to Mercy Alone”. We heard missions reports from Zimbabwe and Swaziland. Joseph Soko, the host pastor (see photo above), gave a quick historical overview of the growth of the Reformed Baptist movement in Zimbabwe from about 2001 to the present day. Andy Silemane (see photo below) talked about their church’s growing missions efforts in conjunction with the World Mission Centre in Swaziland starting from 2002. Each of the missions reports was followed by prayer. 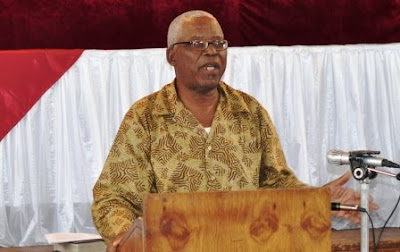 Brian (see photo below) then led us in singing “Not what these hands have done” before Jeff Gage came forward to preach on “The Supernatural Nature of God’s Grace.” 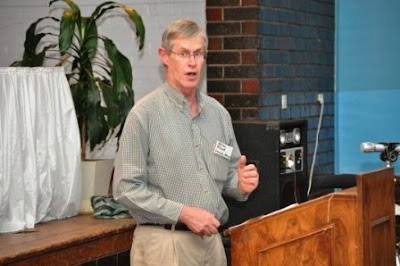 Jeff (see photo below) began by asking us whether we believe that God knows the future for certain—everything about the future with certainty. He went on to assert that if we did then we should also believe everything being taught in this conference. God knows exactly and with certainty before we even decide to do it. How? There are two answers. The first was that he does not know with certainty. To take that route would be to deny the very nature of God. The second answer is to say that he knows everything because he plans everything. 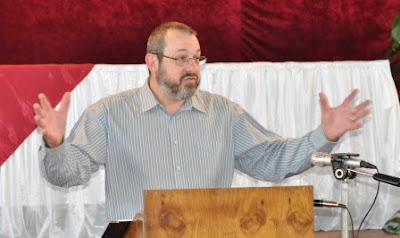 The main thrust of Jeff’s sermon comprised answering the question: How do the elect of God receive this salvation? He used John 6:35-44 to bring out three important aspects about the supernatural nature of God’s grace. Jeff said:

(1)This passage begins with the sweeping offer of the gospel. It is “whoever” comes to me, “everyone” who comes to me will have eternal life, etc. This is based upon the all sufficiency of who he is. Particular redemption is sufficient for everyone! 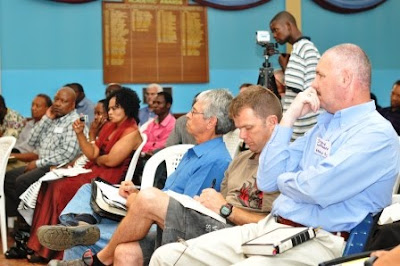 (2) There is also the sovereign will of the Father in this passage (v.37). The Father will not fail to save all those whom he has chosen and given to the Son (v.39). What about man’s free will? We have a natural freedom to do and choose things. However, our persons are not entirely free. We are limited not only by the way God has made the world but also by our present constitution.

(3) There is finally the certain response of the elect. It is not prevenient grace that God uses when saving sinners but irresistible grace. God uses almighty power to change the sinner’s will and so makes him able and willing to take up the free offer of the gospel. This is called “effectual calling”.

In conclusion, Jeff said that this truth of God’s supernatural saving power ought to give us encouragement in preaching and in evangelism. It also must ground our assurance of salvation and deepen our humility. Finally, he said that it ought to energise our worship. Amen! 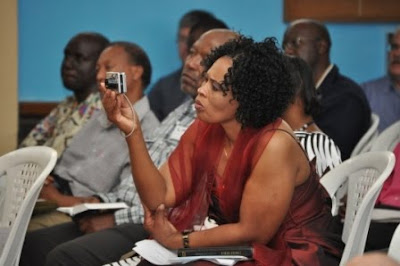 During the entire hour-long sermon I noticed that a lady held her small camera right in front of the pulpit recording the sermon on video (see above two photos). Every so often she changed hands or supported her arm with her other hand. She persevered to the very end. I was impressed!

Brian Stone led us in singing “Glory be to God the Father” and Christo Beetge closed the meeting in prayer. Join me tomorrow as we experience our final half-day of the conference!
Posted by Conrad Mbewe at 9:37 PM