Thank God for the Safety of our Children 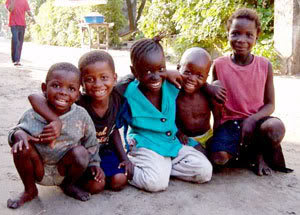 Now his parents went to Jerusalem every year at the Feast of the Passover. And when he was twelve years old, they went up according to custom. And when the feast was ended, as they were returning, the boy Jesus stayed behind in Jerusalem. His parents did not know it, but supposing him to be in the group they went a day's journey, but then they began to search for him among their relatives and acquaintances, and when they did not find him, they returned to Jerusalem, searching for him. After three days they found him in the temple, sitting among the teachers, listening to them and asking them questions (Luke 2:41-46).

Last September, we had an incident at our church’s Christian school (Eagles Nest School) that made me most grateful that I live in this part of the world—despite all its problems.

A parent arrived at school to pick up her daughter only to hear that someone had already come and picked her up. Knowing that she had not asked anyone to do this errand for her, she panicked. She made a few frantic calls on her cell phone to relatives and friends who could have taken such an initiative and none of them had done that. She rang her husband and told him the bad news. After that, she sat down and started crying—I mean, literally wailing. We were having an elders’ meeting across the driveway and so we could hear the poor woman weeping her heart out. Finally, John, one of the elders, excused himself so that he could help. His wife, Honester, was the school Head-teacher and so it was the least a husband could do!

John told us later that when they got to the Kabwata Police Station, the cops noticed the woman with them who was wailing. When they enquired what was going on, they were told that her daughter had been taken from school by a stranger and so far they had failed to find her. The cops laughed and said, “Madam, don’t worry. Children do not get stolen here. Your daughter is safe somewhere and is probably even playing.” The communication system at this police station was down and so they were advised to go to the Libala Police Station so that the case could be relayed to all the stations.

They went to Libala Police Station and their experience was exactly the same. As they walked in, the police asked why the lady in their company was crying. When they told the cops what had happened, they laughed. “Madam, stop crying,” they said, “we never have cases of stolen children here and yours is not likely to be the first one. You will probably find that your daughter is at a neighbour’s home playing.”

Well, the cops were right. John said that as they drove the mother back to her home, she got a call on her cell phone. It was from a home down her street. Her daughter was there and they were getting anxious because each time they tried to bring the girl home they found the gate locked and the lights still off in the house. They decided to ring the mother just in case something had gone wrong with her because she was normally at home by this time! The neighbor explained that when they went to collect their daughter, this woman’s daughter was playing with her and insisted she wanted to come along. Not wanting to disappoint her, that was how they got both of them at the same time. The poor woman felt rather foolish after all the tears she had shed and for her failure to believe the policemen when they assured her that her daughter must be safe and sound!

John’s testimony cheered our hearts as elders and for a few moments we talked about how this experience contrasted with how things are in the West. Our country may have its fair share of problems that should cause us to blush, but we must thank God for his common grace to us with respect to the safety of our children. As I reflected on this, I was reminded of texts of Scripture such as the one above. In first century Palestine, Jesus could be missing from his parents a whole day and they would not be worried at all. He must be safe. It was not until bedtime that they began to worry. In many parts of the world today, a child is never out of sight even in church for fear of being stolen.

There are many mornings and afternoons when I see small children in school uniforms walking alone or in pairs as they make their way to or from school—and the school is quite a distance away. On other occasions I see children coming from the market with small packets of groceries in their hands, blissfully walking along as they make their way home. And here are cops saying they never get reports of missing children around here. That must sound like heaven for many of our friends in the West, where children are preyed upon and snatched by human predators. Let us never take this common grace for granted. Let us thank God for the safety of our children.
Posted by Conrad Mbewe at 8:13 AM