My recent visit to the USA

My recent preaching trip to the USA was like sweet and sour sauce. Let me begin with the sour part. In all the international trips that I have undertaken before as an itinerant preacher, this one had by far the highest number of frowning providences. I mean, almost anything that could go wrong went wrong. When checking in for the first part of my trip (Lusaka to Johannesburg), I found that I was not on the flight despite having a ticket in my hands. Thankfully, the flight was not full and so after a lot of intercom communication, the lady at the check-in counter allowed me on board. In Johannesburg as I was checking in for my second flight (Johannesburg to Washington) I discovered that the flight had been cancelled. I was referred to the reservations desk to see what could 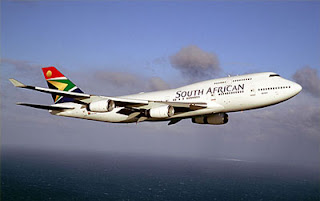 be done for me. There I discovered that even the return ticket which I had in my hands was cancelled last February. So all I really had on me was a one way ticket, and that for a flight that had been cancelled. There was no way the US immigration would have allowed me into their country with only a one-way ticket. One hour or so later, the reservations officer corrected all this and put me on a New York bound flight to leave later that evening. Only, I was $1,000 poorer by the time he was through with me.

That was only the beginning of my troubles. Upon arrival in the USA, my suitcase was nowhere to be seen and my phone could not work. I had to buy another phone in order to keep in touch with family, flock and friends, and it was not until a week later that the suitcase finally arrived—with half my souvenirs broken. That’s not all. At the end of the third and last part of my trip (Newark to Indianapolis), we discovered that in Johannesburg the ticketing officer made a mistake on the town from which I was to begin my return trip. He had Indianapolis instead of Kansas City, where I was in fact going to be preaching for Jim Elliff the night before my departure for Zambia. All efforts to change this from the USA failed. We had to recall Lumpuma from retirement in Kitwe in order to help us correct it—and she finally managed to do so two days before my return trip. That was close!

But that was not all. As soon as I could (due to past experience), I ordered some smartphones on the internet for a few Zambian friends but on my last day in the USA they had not yet been delivered to the shipping address. Upon enquiring from the supplier about the delay, he apologised saying that they had forgotten to ship them. On that same last day I had two preaching engagements. For the first appointment, where I preached at a lunch hour fellowship in a bank in Kansas City (see photo below; my preaching was watched live in three other banks--in Boston, New York and California), I preached without my glasses because I forgot them in the restaurant where I had breakfast with the elders of Christ Fellowship. For the second appointment, I still preached without them because this time I broke them just before I ascended the pulpit. 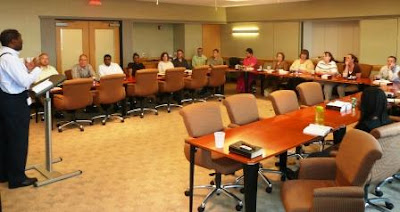 You can well imagine that by the time I was getting on the plane for home the following morning I was paranoid. I was seeing the devil everywhere. I even experienced a panic attack, thinking I had left my passport and tickets on the check-in counter in Kansas City when I was already on the plane to Washington. It was a false alarm! Well, when finally I got on the plane for Johannesburg, I thought all my problems were over and it was “home sweet home”. I was wrong. As we began to taxi towards the take-off position, the plane stopped...in the middle of the runway...for almost two hours. Why? Well, although the weather was perfect where we were, air-traffic control had informed the pilot that there was a storm on our route. They were neither giving our plane an alternative route nor giving us permission to continue the journey until the storm was past. The result of this was that I almost missed my connection in Johannesburg. Thankfully, I finally arrived in Zambia at the scheduled time...but without my bags. What a journey! Almost anything that could go wrong went wrong!

I may have been inconvenienced a few times, but I did not suffer.

All this pales into complete insignificance when I compare it to the sufferings that men like Paul went through for the gospel. He says in 2 Cor 11:24-25, “Five times I received at the hands of the Jews the forty lashes less one. Three times I was beaten with rods. Once I was stoned. Three times I was shipwrecked; a night and a day I was adrift at sea...” Reading that tells me that what I went through is nothing. I may have been inconvenienced a few times, but I did not suffer.

Well, that is what went wrong. But what is it that went right? That is the sweet part. To begin with, God gave me a great sense of peace each time something went wrong and provided for me through his people (especially in clothing me while I waited for my suitcase). I remember in Johannesburg hearing people cursing and swearing because they were unable to get onto their scheduled flights or something. I said to myself, “There go I, but for the grace of God.” I admit that there were a few anxious moments when, like Peter, I looked at the water under my feet instead of keeping my eyes on Jesus. Thankfully, that was not too often the case. The Lord gave me grace to be 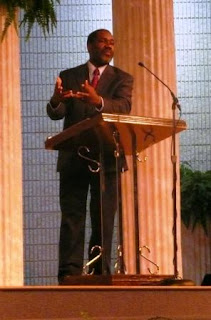 lieve that he sent me to the USA to do his work, and I could trust him to enable me to do the work and take me back home. There is nothing sweeter in life than to be in the vessel with Christ and hence to smile at the storm.

Then, despite all the confusion with respect to my travel arrangements, all my preaching engagements took place as scheduled. I preached twelve times in three different states in two weeks as planned—at the First Baptist Church of Carmel, at the FIRE (Fellowship of Independent Reformed Evangelicals) conference hosted by the same church, at Christ Community Church in Grand Rapids, and at Christ Fellowship in Kansas City. The Lord helped me. It seems from the little feedback that trickled back to me that the Lord was pleased to own his Word. To him alone be the glory! (Someone has put up a whole lot of photos of the FIRE conference on the net. I appear here, and here, and here and here. You may just want to watch them all!)

Then, I met three people I had wanted to meet for a very long time. The first was Amresh Semurath, whom I met at the FIRE conference together with his wife (see photo). We h 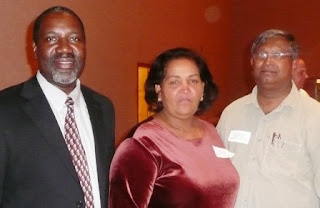 ad corresponded for almost twenty years without ever seeing each other. I had been greatly encouraged by his fidelity to the truth in Trinidad and had on many occasions wished we had the money to fly him to Zambia to preach at our annual Reformed Conference, but it was never to be. Finally, at the FIRE conference, here he was!

The second person was Dr Joel Beeke (see photo below, with Dr James Grier and me). I do not know how I can express my delight in f-i-n-a-l-l-y meeting him. From the 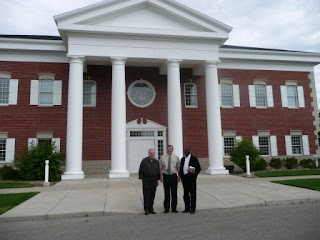 day I read his little booklet, Holiness, produced by the Banner of Truth Trust, I had read everything about his ministry with great interest. He gave me a guided tour of the Puritan Reformed Theological Seminary. The icing on the cake was when he showed me the Puritan Resource Centre, where copies of almost all the works by and about the Puritans are stored. Amazing!

The third person was Hope (see photo below), my long lost sister whom I last saw eight years ago when she came to Zambia for the funeral of her mother, who was my mother’s immediate younger sister. (Now, I know that to a Western mind, she ought to be my cousin. In our culture, the children of my mother’s sisters and my father’s brothers are my brothers and sister—and it is not just a play on words. It is real). It was good to meet her husband, Mwemba, and their three sons—John, Junior, and Matthew—fine lads! I enjoyed every moment with them. The parting on the third day was the most difficult. Tears freely flowed. Hope, you are truly precious! 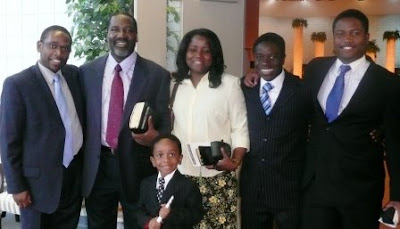 What else was sweet? It was when Pastor Steve Krogh took me to the Theological Book Network headquarters (see photo below) and Dr James Grier gave me a guided tour of the Christian publishing houses in Grand Rapids—the capital city of Christian publishing in the world. That is where Zondervan, Baker Book House, Eerdmans, etc, have their headquarters. I felt like a child being released in a candy shop but being told not to mess up his appetite because from the shop they were going straight for supper. It was a catch-22 situation. Here I was with all the good books that one can ever dream of in the world, and yet the airline could only allow me a few kilograms. In fact, I had to pay an extra $50 dollars for overweight when I left Grand Rapids for Kansas City just because of the few books that I bought for next-to-nothing because of the high discounts that they were being sold for. Some of the books were going for 90% discount. Can you imagine? Coming from Africa, where Christian books are “as rare as a dog’s horn” (I hope you know that African proverb), I felt like saying, “Lord, it’s not fair!” But I remembered that to him to whom much is given, from him much shall be required (Luke 12:48). On the judgement day I will be glad that I laboured in Africa. 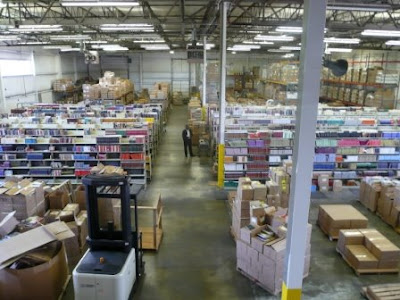 Just one more sweet experience and I must let you get on with other business. I met individual after individual who regularly listen to the pulpit ministry of KBC on the internet. One example will be enough. In Kansas City, Christ Fellowship is a church that comprises a number of home groups. More like the house church movement in China. As I was preaching in one of those home groups, one man (sitted with his wife in black t-shirt, directly opposite me in the photo below) told me that he could not believe his ears when one Sunday the elder in charge of their home group announced that I would be preaching there. He said he had been a keen and regular listener to my preaching on the internet for some time, and now to imagine that I would be in his church was a cause of great rejoicing on his part. To borrow his own words, “I said to [the elder], the man who has taught me everything I know on Romans 6 will be here!” That, I think, was the cherry on the cake. 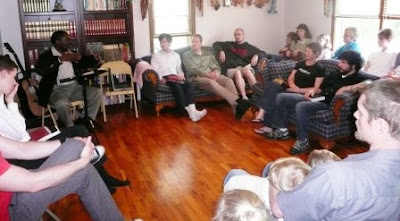