Our Wandering but Well-Supplied Annual Conference (1995-1999)

“The pillar of cloud to lead them in the way did not depart from them by day, nor the pillar of fire by night to light for them the way by which they should go. You gave your good Spirit to instruct them and did not withhold your manna from their mouth and gave them water for their thirst” (Nehemiah 9:19-20).
Here is my second instalment on the Zambian Reformed Conferences. In my previous blog on this subject, I wrote about the first five years. Those were glorious years. It was very clear to those of us who were organizing these conferences that an unusual movement of the Holy Spirit had started in the country, especially among the young people in our churches who had espoused the Reformed Faith. If we did not move apace with them, they were going to run over us. We had to keep the conference going, despite the two major challenges that I have listed below. 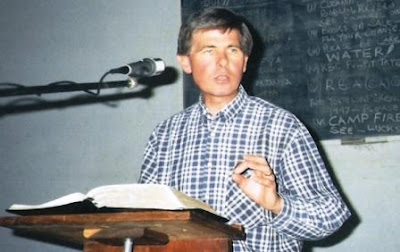 The years 1995 to 1999 were spent trying to find a suitable home for the conference. In 1995 we met in Lusaka at what was then called the College for Teachers of the Handicapped (now called the Zambia Institute of Special Education, ZAMISE). In 1996, we moved to Kabwe at what was then popularly known as Jim Ford’s Farm, under the auspices of Bethel Baptist Church (see photo of the leaders below). I guess Jim Ford's Farm has also changed its name since then. All the photos on this blog were taken during the 1996 conference. In 1997, we moved to Ndola and met at the Northern Technical College (NORTEC), under the auspices of Grace Reformed Baptist Church. In 1998 we were back in Lusaka, but this time we tried out the new facilities at Kabwata Baptist Church. When in 1999 we were celebrating the 10th anniversary of the Zambian Reformed Conference, we had made full circle and were back at ZAMISE in Lusaka. 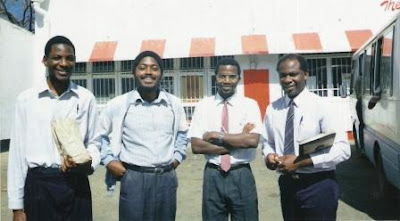 From the organizational side, the other challenge during this period was that of getting good external preachers. Each year this was a nightmare. Those of us who live in Africa do not appreciate that we are not “the destination of choice” for many people in the West. The media (such as CNN and BBC) have painted the picture that Africa is about civil wars, malaria, HIV and AIDS, famine, droughts, corruption, coups, etc. Also, the airfares to Africa from any part of the world are not cheap simply because there is not as much traffic as there is elsewhere. So, getting good international preachers to come into the middle of Africa was never the easiest of tasks. In this entire period of five years, we only managed once to get two preachers (Pastor John Sale and Dr Hugh Thomson) in the same year (1997) from outside Africa. We were commended to them per kind favour of Dr Lazarus Phiri, who knew both of them personally while he was studying out there in the West.

The full list of preachers is tabulated below.
1995 - (Lusaka, Glendon Thompson, Keith Underhill, Choolwe Mwetwa) Our Great Saviour: The Person and Work of Christ, Preaching Christ from the Old Testament.
1996 - (Kabwe, Happy Ngoma, Erroll Lester, Conrad Mbewe, Percy Chisenga and Ronald Kalifungwa) The Christian Home.
1997 - (Ndola, Martin Holdt, John Sale, Hugh Thomson) Eschatology, the Christian and Suffering.
1998 - (Lusaka, Roland Eskinazi) In the World but not of the World.
1999 - (Lusaka, Nigel Lacey, Ronald Kalifungwa) Ten Years On: Personal, Family and Church Reformation.
Although Glendon Thompson is now a pastor in Canada, at that time he was in South Africa. Also, in 1999, Nigel Lacey had just recently taken up the pastorate at Lusaka Baptist Church while Ronald Kalifungwa was pastor of Lynnwood Baptist Church in South Africa. Dr John Anderson of the UK commented about our 1999 preachers, “You have for your preachers this year a white man pastoring a black church and a black man pastoring a white church!” And he was right!

I need to quickly state that although it was a nightmare finding a place to meet and getting preachers each year, the Lord never let us down. By the time of the conference, we had a good enough venue and able men to feed our souls and so the conference continued to grow in strength with each succeeding year. As it was with the Israelites, in all our “wilderness wanderings” we had the pillar of cloud and the pillar of fire to lead us, and his Holy Spirit instructed us each and every year. 1999 was our 10th anniversary. It had been a glorious first ten years!
FYI: The 20th anniversary of the Zambian Annual Reformed Family Conference and School of Theology is scheduled to take place from Monday 24th to Friday 28th August 2009 in Lusaka (precise venue yet to be announced). The preachers are Ronald Kalifungwa, Conrad Mbewe, Choolwe Mwetwa, and Alfred Nyirenda. These have been specifically chosen because they either preached at or were the organisers of the first conference twenty years ago. The theme of the conference will be "The whole of life under the whole of Scripture". Brethren are being expected from Australia, Botswana, Kenya, Namibia, Sierra Leone, South Africa, Swaziland, USA, Zimbabwe, etc. As usual, the conference is free for those coming from outside Zambia. We look forward to seeing you there!
PS: As you can see from the photos, there is a serious paucity in our archives. If you have any photos from some previous conferences, please scan them and send them to us (email: tulip@iconnect.zm).
Posted by Conrad Mbewe at 5:31 PM