The death of a pet 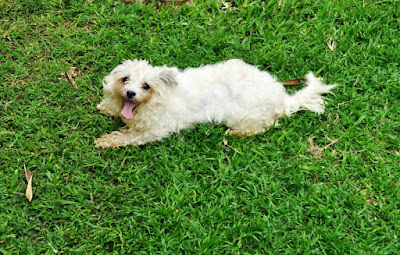 A few days ago I stood by my study window and saw our youngest daughter, Mwape, standing helplessly as she saw her pregnant dog, Chelsea, breathe her last. Mwape had taken a day off from work because she was not feeling well herself. Little did she know that it was going to be her last day with her dog.

It was evident that the exceptionally territorial dog had been poisoned on Sunday while we were at church. (Thieves often do this when they want to steal and find your dog too ferocious). The whole day Monday Chelsea was not her usual active self but we all thought that perhaps she was getting close to delivering her puppies. Tuesday morning she was gone.

Mwape had tried her best to save Chelsea’s life. She brought in a vet who gave the dog all the attention and medication possible. The vet stuck around all morning. Chelsea slightly revived and we all became hopeful but it was only for a few moments. The poison had already done too much damage. Chelsea died.

As I looked at Mwape standing motionless and teary-eyed halfway between the lifeless body of Chelsea and me, I walked over to her and hugged her. What more could a dad do? I shared with her my own pain when a hit-and-run car killed my dog when I was only nine years old.

That was forty-five years ago, but retelling Mwape the events of that day revived those painful emotions. My dog’s name was Cary and I loved him like a brother. I always looked forward to his warm and enthusiastic welcome whenever I returned from school. I would only leave him when I was called in for lunch.

One Saturday morning, I woke up and rushed outside only to find Cary lying on the driveway dying. I sat down at the edge of the veranda and cried my heart out as I looked at my childhood companion breathing his last. I stroked his fur until he breathed his last. Time stood still. Many thoughts went through my young mind that day.

The biggest question was, “Why?” “Why did God allow this? Why did the people who did this not stop and take Cary to the vet? Why do people do such things? Why haven’t the police gone after them?” To my little mind these questions were overwhelming and my tears flowed freely. I remember one song going through my mind again and again:

Lord, we don’t need another mountain
There are mountains and hillsides enough to climb
There are oceans and rivers enough to cross
Enough to last ‘till the end of time

As the events of forty-fives years ago caused my chest to heave, I realised that I was standing with Mwape about a metre from the exact spot where I sat as a nine-year old boy mourning my first major loss in life. The body of Mwape’s dead Chelsea was now lying in the same driveway that my Cary’s lifeless body lay in 1971.

The one major difference, though, was that I was nine years old while Mwape is now in her early twenties. Another was that whereas I could take a moment to hug my mourning daughter, I do not remember anyone hugging me. Perhaps they did. All I recall is that all the big people were busy preparing to dispose of Cary’s body.

I recall dad, uncle, and our domestic servant (“ba Lazalo”) getting a spade and a sack. They put Cary’s body in the sack and carried it to its last resting place. I followed. As I sat on the grass nearby, I watched them with teary eyes as they dug a hole in the ground, let down the sack, and covered it with soil. “Good-bye, Cary,” I cried as we headed back home.

When my family returned to occupy my childhood home in the year 2012, the first place I visited was the place where Cary was buried. It was about 300 metres from our home. In 1971 it was the edge of a forest but it is now a built up area. I stood at the spot and let the emotions of those days touch my heart afresh.

And I think this is true of dogs more than any other animal. No wonder they have gained the title, “Man’s best friend.” I think cats are not as attached to individuals as dogs are, but I am willing to be corrected. Dogs will fight to protect their owner and their owner’s territory, whereas cats will get onto the laps of anyone who gives them the chance.

Is there any biblical example of this attachment between humans and animals? I can think of at least one. Here it is (2 Samuel 12:1-6): “And the LORD sent Nathan to David. He came to him and said to him, ‘There were two men in a certain city, the one rich and the other poor. The rich man had very many flocks and herds, but the poor man had nothing but one little ewe lamb, which he had bought.

‘And he brought it up, and it grew up with him and with his children. It used to eat of his morsel and drink from his cup and lie in his arms, and it was like a daughter to him. Now there came a traveller to the rich man, and he was unwilling to take one of his own flock or herd to prepare for the guest who had come to him, but he took the poor man’s lamb and prepared it for the man who had come to him.”

The Bible says, “Then David’s anger was greatly kindled against the man, and he said to Nathan, ‘As the LORD lives, the man who has done this deserves to die, and he shall restore the lamb fourfold, because he did this thing, and because he had no pity.’” Why did David respond with such anger? Could it be that he understood the emotional attachment between that man and his ewe lamb? Perhaps.

I am sure our daughter, Mwape, feels like David towards the thieves that poisoned her dog a few days ago. I certainly felt that rush of anger back then as a little nine-year old boy. How we can get so attached to pets is yet another puzzle we will only unravel when we are seated by the side of Jesus in eternity. Come, Lord Jesus. Come!