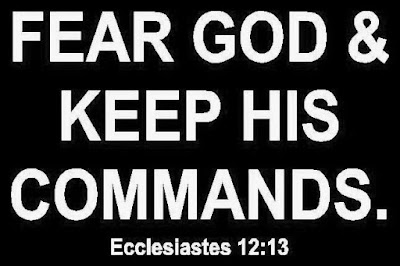 The question that was asked by one of the criminals crucified with our blessed Lord Jesus Christ has been on my mind of late. This has been primarily because of the flood of “prophets” that have poured into the church in Africa in the recent past. It is an epidemic!

Here was a man who had done despicable things. In fact, for a while he had continued to sin even after being hanged on a cross next to Jesus. However, somewhere along the way, he came to his senses as he saw Jesus and heard his dying words. His conscience came alive.

This criminal not only abandoned his sinful ways, but also rebuked his fellow sinner, saying, “Don’t you fear God?” He realised that Jesus was unique. Anyone treating him badly would receive God’s hottest wrath. He then turned to Jesus and appealed to him for clemency.

Anyone whose conscience is alive would behave like this repentant criminal upon realising that the one he is insulting is God himself. That is how true believers should react upon yielding to sin in general and especially to exploiting the church of the Lord Jesus Christ.

I honestly cannot understand how men and women with consciences can continue with impunity defrauding the church of Jesus Christ exploiting their vulnerable congregants sexually. Don’t they have consciences? Do they not fear God?

We are all sinners. I sin. You also sin. That is not the issue here. What makes me tremble is the arrogance and total absence of repentance or remorse in these people. It is bad enough to sin “out there”. When people rob and abuse the apple of God’s eye you shudder for them!

Such people are like Belshazzar who in a drunken stupor started playing with holy utensils from the Temple until a hand wrote on his palace walls, “Tekel, Tekel, Mene, Parsin”. From the untouchable height of power, Belshazzar was reduced to total impotence and shame.

In one sweep, the Lord is able to humiliate his enemies before a watching world. Read church history and see how he has done this over and over again. It is safer to taunt a ferocious lion while you are in its cage than to play into the hands of the living God in this way.

Yet for me what is even more terrifying is not so much how the Lord is able to humiliate hypocrites in this life but more so how he will destroy them in eternity. What is a moment’s embarrassment compared to an eternity in the lake that burns with fire and brimstone?

The apostle Paul wrote, “…we make it our aim to please him. For we must all appear before the judgment seat of Christ, so that each one may receive what is due for what he has done in the body, whether good or evil” (2 Corinthians 5:9-10).

It is clear from this that one of the chief springs of self-regulation in the heart of the apostle Paul and in the hearts of his fellow apostles was the reality that each one of us must one day appear before God to give an account to him concerning everything that we have done.

At that time, we will receive from him who knows all things and sees all things our eternal reward or our eternal condemnation. He will either say to us, “Well done, good and faithful servant,” or he will say, “Get away from me you wicked and lazy servant.”

That moment will truly matter because from that point we will either go into unimaginable bliss forever or into overwhelming misery for all eternity. A person is a downright fool who refuses to reckon with this fact. Our eternal felicity hangs on that one single moment.

If you want to know how God “feels” about those who exploit his people for their own selfish ends go back in history and see what our gentle Lord Jesus did to those who were making brisk business in the Temple. He whipped them, drove them out, and overturned their tables.

Elsewhere, Jesus said, “…whoever causes one of these little ones who believe in me to sin, it would be better for him to have a great millstone fastened around his neck and to be drowned in the depth of the sea. Woe to the world for temptations to sin! For it is necessary that temptations come, but woe to the one by whom the temptation comes!” (Matthew 18:6-7)

Think of what this means especially to those “prophets” who are wooing female congregants into the bushes and hills and sexually abusing them in the name of cleansing them from spirits that are interfering in their marriages or preventing them from getting pregnant.

Think of what this means to so-called “men of God” who are fattening themselves and their bank accounts at the expense of their congregations whom they are hoodwinking into parting with their money through misapplied texts of Scripture. I really tremble for them.

Think of what this means to the many pastors whose bad example in this realm has opened the door to the current flood in the church of Jesus Christ. Many are now thinking that the best way to make yourself rich is by becoming a pastor, a bishop, a prophet, or an apostle.

Think of what it will mean on the judgment day for those preachers who have turned many from seeking God to seeking gold, from extoling self-denial to pursuing self-aggrandisement, and from looking up to the cross daily to looking up to them for earthly blessings.

Think of what it will mean for church leaders who have traded in the worship of God for entertainment so that people attending church are thinking of having fun rather than offering to God the praise that is due to his name and quietening their hearts to hear from him.

Think of what it will mean for men of the cloth who are persuading their followers to eat grass, snakes, and rats in the name of the Lord while jumping on them as if they were made of rubber. Imagine what Jesus will do to them when he returns in all his power and glory.

Friends, if you are going to sin, go sin elsewhere. Do not scoop red-hot coals of fire into your bathtub and then dive into it with your eyes wide open. God will punish all unrepentant sinners but he will punish even more severely those who exploit his church with impunity.

I repeat, don’t you fear God?