News concerning a pastor in South Africa who has made his church members to eat grass has shocked the world. What many people do not know was that a few days prior to this, photos made their rounds on the Internet showing this pastor walking on his flock while they lay on the floor as a way of delivering them. Something has certainly gone awfully wrong.

Pastor Lesego Daniel of Rabonni Centre Ministries has certainly brought himself into the limelight by these insane activities. He is telling his congregation that this is how to get closer to God. One of his members defended this action by saying, “Yes, we eat grass and we are proud of it because it demonstrates that, with God’s power, we can do anything.” 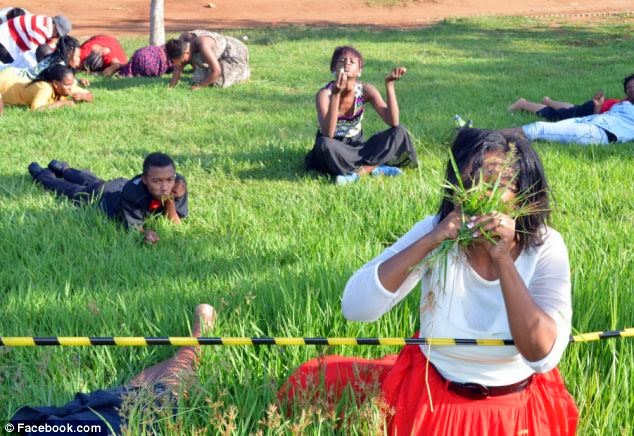 As usual with these pranks, while some were claiming that they were being miraculously healed of sore throats and lame legs by eating grass, others were rushing to the toilet with hands on their stomachs to go and vomit.  As for “the man of God”, his only comment was, “God is at work and his people are testifying right now at the farm. To God be the glory.”

If this absurd situation was unique, I would not be punching away feverishly at my keyboard as I am doing now and even knocking over my cup of tea (sorry dear). Sadly, these kinds of crazy situations are fast becoming common fare in many Charismatic churches and ministries across the continent of Africa. The bizarre antics are getting crazier—until now congregants are being made to eat grass while “the man of God” claims it is being done to God’s glory. 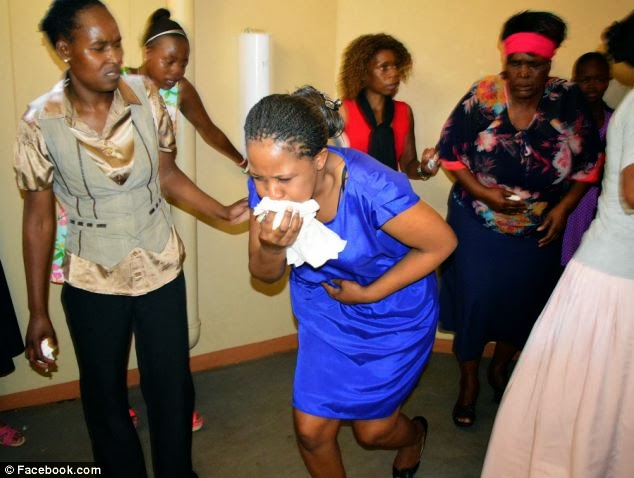 I am concerned about this. How can pastors and churches that claim to believe in the Bible and even preach from the Bible go so far from basic biblical practice in their worship? How can even those who have walked off university graduation podiums with powerful qualifications accept “worship” that is reduced to nothing more than a dancing frenzy? How can they knowingly accept being pastored by a “man of God” who is sexually immoral?

I have no doubt that what we are seeing here in Africa is the fruit of a century of teaching that says although the Bible is inspired by God it is not sufficient as a tool for instructing believers. We need visions, dreams, prophecies, etc. Having started on that premise and thus unhinging ourselves from “Sola Scriptura”, the trajectory is now reaching alarming levels.

The result of this separation between the pastor and biblical exposition is that “the man of God” has taken on an authority that is independent of the voice of God in the Scriptures. He can tell you to do anything under the guise that God has spoken to him about it. Once he has the congregation eating from his hands like that he will soon have them eating grass outside.

This was not the position of the Reformers. The Reformers stated unequivocally that the extra ordinary revelatory gifts of the Holy Spirit ceased with the apostles. Thus they secured the church to the Scriptures and to the Scriptures alone. Anything that was not derived from there was heaped together with everything else in the rubbish dump. Period!

The Puritans came along a century later and also stood in the same position as the Reformers. The Baptist Confession of Faith of 1689, which was penned during that era, states unequivocally, “Therefore it pleased the Lord at sundry times and in divers manners to reveal Himself, and to declare His will to His church;

“…and afterward, for the better preserving and propagating of the truth, and for the more sure establishment and comfort of the church, protecting it against the corruption of the flesh and the malice of Satan and the world,

“…it pleased the Lord to commit His revealed Truth wholly to writing. Therefore the Holy Scriptures are most necessary, those former ways by which God revealed His will unto His people having now ceased.” This is what is historically called the cessationist position.

Notice the statement “…those former ways by which God revealed His will unto His people having now ceased.” It was now Scripture alone. Anyone who demanded anything from God’s people that was not written in the Scriptures was not to be listened to. With the advent of the Charismatic movement at the end of the nineteenth century, the evangelical church has buckled on this position and so we are now paying for it dearly and being made to eat grass.

Those who allow so-called visions, dreams, and prophecies today say that to avoid tipping off the cliff Christians should test everything against Scripture. That assumes that Christians will be exposed to the Scriptures in the first place. Sadly, the current fascination with “visions, dreams, and prophecies” has killed appetite for serious Bible study. Go to many of those churches that thrive on these fascinations and see if they still have good old Bible studies.

Do you honestly think those congregants who were eating grass know their Bibles? No, they spend their time at church dancing themselves into senselessness and then listen to a few verses of Scripture being tortured into confessing the exact opposite of what the Holy Spirit actually meant them to say when he inspired their original authors. It is terrible!

While the apostles were alive, such “men of God” would have been exposed for who they really are—heretics—and excommunicated from the church. But today’s so-called apostles are just overgrown boys who have a fascination with and insatiable desire for titles. They are not true apostles and cannot excommunicate a fly. Hence, the heretics claiming visions and dreams are getting away with anything—even making their congregations eat grass.

I am afraid that until we plug this hole, our only comfort will be that such bizarre things are not yet happening in our church. But all it will take is a strong personality to come around and start claiming he is seeing visions and dreams and the downward spiral will commence with ever increasing speed until the unwary in your church find themselves…eating grass.

Let us get back to “Sola Scriptura” and put an end to this nonsense once and for all. Let us stop being ecclesiastical witchdoctors and get back to the work of expounding Scripture. Why are we ashamed of this when the very reason why the Scriptures were given was so that “the man of God may be complete, equipped for every good work” (2 Timothy 3:17)? If God has completely equipped you through the Scriptures, why would you want anything else?

As we read about this week’s Christians eating grass, may we be caused to do more than claiming that we are not doing anything that crazy. Let us examine ourselves to see if we have inadvertently opened a door through which another Lesego Daniel might sneak in and with time bring disrepute to the Lord’s name under the banner of evangelicalism. Believe me, “Sola Scriptura” is the only bolt that totally locks out such self-deluded impostors.

“To the law and to the testimony! If they do not speak according to this word, they have no light of dawn” (Isaiah 8:20).