Your Wife Is Your Second Mother

A WORD TO MARRIED MEN: When you underwent pre-marital counselling, I am sure your counsellor did not tell you that in marrying a wife you were acquiring a second mother. The only difference is that when you met your first mother, you were a little baby and so she could experiment on you as she pleased and you did not have much of a choice. After all, all you could do was to kick up tantrums (i.e. her understanding of your refusal to accept her will without putting up a gallant fight).

Now you are an adult. You have a mind of your own. You think you know what is best for you. However, in comes your second mother—your wife. She is concerned about your bulging waistline, your sagging cheeks, or your thinning hairline, and she expects you to take her efforts at addressing this without adult tantrums (again, her understanding of your refusal). That is where the problem is. 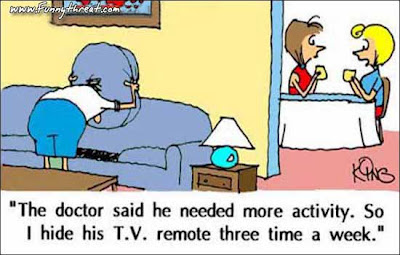 It goes something like this. Your wife spends an afternoon with her friends—perhaps at a church outing—and, while they are gossiping about men (just as men do about women), they express some of their concerns about their husbands. Those who have been more successful than others share their magic formulas with those who have been less successful. “Try it,” they assure their friends, “it works wonders!” And, sure enough, your wife resolves to “try it” on you!

When you were a baby, you were too young to notice that your mom had decided to suddenly change your skin lotion, the colour of your clothes, or your meal patterns because of advice from friends that she had met the day before. After kicking and screaming for a few minutes you simply accepted that this was your fate in life and you adjusted to the inevitable. After all, she was your mother.

The problem is that now you are an adult. When your breakfast menu changes from a full three-course meal to a solitary banana sitting on a plate, you do not take that lying down. “Where is my breakfast?” you ask. “You haven’t seen it? You’re only having a banana for breakfast today,” your wife answers from the kitchen. One solitary fruit for breakfast is not your idea of breakfast and so you put up a gallant fight. “Yah, but where was the decision made to change the menu? I thought I was the head of this home… blah, blah.”

Perhaps you are about to go out for some event and think that your favourite blue shirt is just right for that occasion. You search for your shirt but cannot find it. Finally, you ask your wife if she has seen it and her response is, “I decided to give it away. I felt that you had worn it enough times and it needed its well-deserved rest. So, I gave it to your younger brother when he was last here.” “Excuse me,” you blurt out, “who decides when a shirt has been worn too many times? I thought I was the head of this home… blah, blah, blah.”

Anyone who has ever watched the television comedy series Keeping Up Appearances can see the second mother in Hyacinth. Her husband, poor henpecked Richard, just never seems to get anything right! Hyacinth is the one who knows what impression to maintain with the neighbours and she makes sure Richard toes the line. What makes this comedy so hilarious is that Hyacinth exaggerates what many men often have to live with in their homes. It is the phenomenon the Bembas call, “Tachimoneka bwino” (English: “It doesn’t look nice”).

If you are a husband, then you must be familiar with the following comments and questions from your wife: “I would have thought by now you knew where to put your dirty pants and socks.” “This room is stuffy; you mean you couldn’t open the windows?” “Did you take your morning bath?” “No, no, no, you can’t put on that shirt with that trousers; the two do not go together.” “Have you eaten your breakfast?” “Another helping?! No, that's too much!" "Here. Have some more vegetables. They are good for you." "I don’t like that friend of yours.” Who do these comments and questions remind you of? Your mother, of course!

Email ThisBlogThis!Share to TwitterShare to FacebookShare to Pinterest
Labels: Marriage and Family, Reflections