The Kingdom of Swaziland & the Manzini Fellowship Church

“The people who walked in darkness have seen a great light; those who dwelt in a land of deep darkness, on them has light shined” (Isaiah 9:2).

I have just returned from

Swaziland (see map), a small mountainous country with a population of about one million people. Unlike most African countries that have many tribes and tribal dialects to try and keep together, Swaziland comprises only one tribe and one dialect. It is about forty-five times smaller than Zambia and is almost swallowed up by its neighbour, South Africa, except for part of the eastern border where it is bordered by Mozambique. Economically, the country is almost totally dependent on South Africa. 90% of its imports come from there and 75% of its exports go there. It is a country that is rich in natural resources and its main industries comprise coal mining, wood pulp and sugar.

onarch. Presently the monarch is King Muswati III (see picture), who rules together with the Queen Mother. Civil unrest calling for democratic change in the early 2000s forced the king to allow for some measure of democratic reform. However, he still appoints the Prime Minister, the top judges in the judiciary, and almost half of the Members of Parliament. So, it should not be too surprising that pressure for more democratic reforms continues to be exerted by civil society.

Swaziland has an HIV prevalence rate of 39.2%, which is the highest HIV prevalence rate in the world! This is indeed a great challenge to the nation. The churches mainly come under the Council of Churches, the Conference of Churches, the League of Churches and the Independent Churches. Among the major "churches" in the country are the Zionists (about 40% of the population), Roman Catholics (20%), the Seventh Day Adventists, and the Charismatic/Pentecostal churches.

The good news is that ten years ago (in 1999), about one hundred individuals came together to form the Manzini Fellowship Church (MFC). They left the Evangelical Church in Manzini due to serious doctrinal differences. Although initially this parting of ways led to a lot of ill-feelings, with time these two churches have developed an amicable relationship as two separate local bodies of Christ in Manzini. At first, it was difficult for them to find a place to meet, and consequently they met in four different homes on Sundays as cell groups. Once every two months, however, they came together in one home that was spacious enough to accommodate the whole congregation. This went on until 2000 when the church hired two adjacent classrooms at the University of Swaziland and used them as a meeting place. In the same year, the church purchased a piece of land in the heart of the city but it was not until June 2003 that they finished the first phase of their building and began to meet there. The second phase was completed in 2008, and so their present building (see picture below) sits 150 people.

The church’s first pastor was Dr Charles Mahlangu, and he served with five elders (O B Macwele, O M Dlamini, H G Shongwe, G R Bhembe, and Andy E F Simelane). One of the elders, Andy Simelane, was called a “roving elder” because he went from cell to cell encouraging the brethren. Hence, when Charles left the pastorate to go and take up the principal’s position at the Evangelical Seminary of South Africa (ESSA) in 2002, the church called Andy (wearing glasses in picture below, taken with the current church elders) to take over the pastorate. In the same year 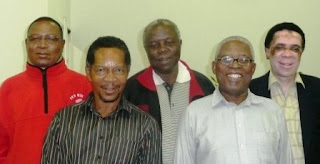 , the church began to support church-planting work in northern Mozambique where they sent two brothers as missionaries. What started out as two churches with ten members in 2002 have now become nine churches with over eighty members. The latest testimony from there has been the conversion of a Muslim leader, who has had to leave the area to avoid being killed. In 2003 they also started to support a new church plant in Thembisa, just outside Pretoria in South Africa. Some members of this church drove all the way from Thembisa to attend the meetings I was preaching at (see their picture below).

For many years the Manzini Fellowship Church remained lonely because th 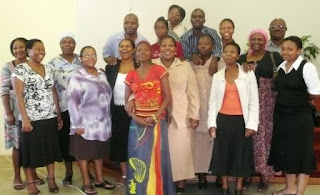 ey could not find any church within Swaziland that held on to the Reformed Baptist position. The breakthrough came in February 2006 when they invited Pastor Martin Holdt of Constantia Park Baptist Church to minister among them. Martin introduced them to a whole host of Reformed conferences in South Africa, such as the Shepherds’ Conference, the Grace Ministers’ Conference, and the Sola 5 Conference. Since then they have not missed a single one of these conferences! To top it all up, the church joined the Sola 5 family of churches in 2007 when Sola 5 had its annual conference in Zambia.

The Manzini Fellowship Church has a very active membership, comprising mostly professional and business people. Their members participate in church-based ministries meant to reach out to non-Christians in obedience to the Great Commission. They presently have 22 such ministries, with about four members per ministry, and each ministry is headed by a deacon. Some of these are a choir ministry, a Christian school ministry, a counselling ministry, an editorial ministry, a ladies ministry, a literature and library ministry, a men’s ministry, and a youth fellowship ministry. One of the ministries that really challenged me was the literature ministry, perhaps because of my love for “home-made” books. It ensures that all the lessons taught in the life of the church are stored in book form so that anyone either teaching on the subject or simply wanting to learn on the subject can purchase the book and read it. A catalogue is maintained of all the books and their chapters/lessons. (The very last photo below shows the pastor standing next to cartons full of "home-made" books, ready for distribution to enquirers).

This is the church that I was invited to minister to across the Easter holidays. The picture above was taken at one of the meetings. We had whole day meetings on Friday 10th and Saturday 11th April. Then on Sunday 12th we only had the morning worship service. The theme of these meetings was simply “The New Testament Church”. On Saturday I also addressed the leaders on the subject of “Integrity of a leader in the Church of Jesus Christ”. During the question and answer sessions, which were held on Friday and Saturday afternoons, one could tell from the questions that the theme was very well appreciated and being actively applied in the minds of those who were listening. On Saturday I simply failed to exhaust the questions. So we tentatively agreed that I return in 2011 to pick up from where I left off!

I would like to commend Manzini Fellowship Church to you for your prayers and active support. The only church I can compare it to in the sub-region outside Zambia—in 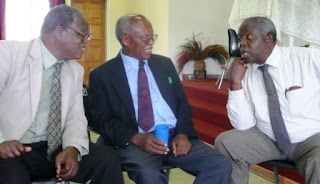 terms of zeal, excitement about the doctrines of Grace and the Reformed Faith, eagerness to learn, a membership comprising largely indigenous professionals and business people—is Grace Reformed Baptist Church in Windhoek, Namibia. We, here in Zambia, have been very encouraged about what has taken place in Namibia. As we pray for that work, let us also remember Manzini Fellowship Church. If the Lord tarries, and these two churches continue to grow, I can easily see them flourishing beyond what the Lord has done among Reformed Baptists in Zambia. Their potential for good on this continent is immense. Above is a photo of one of the church elders, Swaziland's former Prime Minister Obed Dlamini (without jacket), talking to two elderly members during lunch at the meetings I was addressing.

Let me end by saying 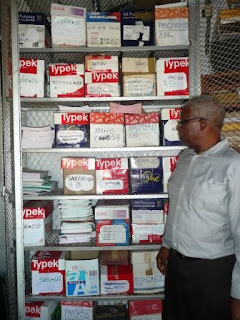 that last year, Pastor Andy Simelane, celebrated his 75th birthday. Although he still looks very strong, it is clear that he senses the approach of eternity perhaps more than many of us. Hence, he speaks very often about his retirement and longings for glory—to the chagrin of many in the church. It is clear that the church loves him dearly. With his wife having already preceded him in the presence of God, one cannot blame him too much for wanting to go and join her there. We need to pray that an adequate or even better replacement will be found for this gallant soldier of Christ so that the work of Manzini Fellowship Church can continue to grow from strength to strength. Amen!
Posted by Conrad Mbewe at 9:59 PM

Email ThisBlogThis!Share to TwitterShare to FacebookShare to Pinterest
Labels: Itinerant Ministry, Other countries