South Africa – A Land of Contrasts

I flew into South Africa for the umpteenth time on Saturday, January 3, 2009, to preach at three pastors’ conferences. I want to use this blog entry to write about my impressions of South Africa—a country of about 48 million people—as an outsider looking in. The best summary of my impression is that South Africa is a land of contrasts, and in that country is a sleeping giant that needs to be awakened.

It is a land that has produced the greatest living political legend of our day—Nelson Mandela.

South Africa is a country in which you cannot help but speak in terms of black and white—even if you are not racist. This is a land in which the world’s natural beauty lies next to some of the ugliest scenes of human depravity. It is a country that has the strongest economy on the African continent and yet has some of the poorest people as well, especially among its black pe

ople. It is a place where you find the most lavish, marble-tiled buildings and just a few minutes away you will find vast tracts of land clustered with tin-sheds called “shacks” where many of its people live. It is a land that has produced the greatest living political legend of our day—Nelson Mandela (picture)—right after the worst form of political experiment in Africa called Apartheid. It has some of the loveliest and godliest people I know on this planet living side-by-side with the worst gun-brandishing criminals.

The in-flight magazine was clearly a public relations tool.

bustling beachfronts, their ecstatic entertainment centres, their wildlife and game reserves, their beautiful botanical gardens, their breath-taking mountain ranges, their luxurious five star hotels with their world-class convention centres, their award winning restaurants with their variety of wines and mouth-watering cuisines, their world-class cricket and rugby teams, their music maestros like Hugh Masekela and Miriam Makeba, their growing African middle-class, etc.

The newspapers, on the other hand, were full of the other side—the dark side—of South Africa. They contained news about murders, race-related and drug-related crimes, abductions, township violence, soul-degrading and explicitly sexual “adult” entertainment, house break-ins, sodomy, xenophobia (as can be seen from this disturbing photograph of a victim), kidnappings, shootings, muggings, women and childr 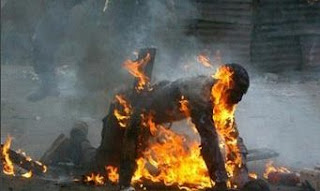 en being raped, instant justice mobs, confidence tricksters, political violence, ATMs being blown up, corruption in high offices, victims of road rage, etc. It is this dark side of South Africa that has caused many of its well-educated citizens to immigrate to countries like the USA, Britain, Canada, Australia and New Zealand. You see, whereas in Zambia it is extremely rare to be shot by thieves even if they wanted to clear out your entire house, in South Africa they shoot you in order to rob you of your wristwatch or cell-phone!

When in 1990 an article appeared in The Banner of Truth magazine announcing the formation of the Reformed Baptist Association (RBA) in South Africa, I hurriedly wrote to the brethren asking them to keep in touch with us for the purpose of mutual edification. Up until then, we were drawing our encouragement in our fledgling Reformed Baptist cause in Zambia from the UK and the USA. South Africa was certainly nearer. The brethren responded by inviting us (Pastors Ronald Kalifungwa, Choolwe Mwetwa and myself) to attend their RBA conferences and preach in their churches. We got to meet men like Martin Holdt, Brian Stone, Trevor Roberts, Wilhelm Odendaal, Roland Eskinazi, etc, whom the Lord was using to kindle the theme of Reformation among the Baptist churches in the country. That was the beginning of our associations with the Reformed Baptist cause in South Africa. Now we cross the Zambezi and Limpopo rivers quite often each year for ministry in this land of contrasts. As I write, Choolwe is in South Africa preaching across the month of January at no less than five to seven Africa Pastors’ Conferences (I tried that circuit last year and had to be brought home on a stretcher!). I am also presently preaching at three Grace Ministers’ Conferences.

Nigeria, with the second strongest economy on the continent, has sent out a large missionary force across the continent. 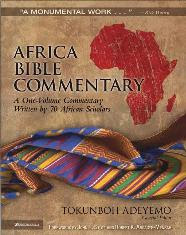 uld we be so concerned about South Africa? It is because this nation has by far the greatest potential to enhance the cause of Christ across the whole of the African continent and that potential still lies dormant. To me, the fact that no South African conservative evangelical scholar participated in the compilation of the trans-continental Africa Bible Commentary is enough proof of this fact. This country has the strongest economy on the continent and some of the strongest churches, doctrinally-speaking. However, most of the wealth and almost all the strong churches are among the white South Africans, whereas the rest of Africa south of the Sahara is almost totally black. Nigeria, with the second strongest economy on the continent, has sent out a large missionary force across the continent, but sadly it is of the extreme and cultic Charismatic type.

Why this phenomenon in South Africa? It is a well-known fact that one of the worst effects of the Apartheid system was to deprive the blacks of South Africa, who are by far in the majority, the privileges being enjoyed by their white counterparts in terms of education, jobs, and other social amenities. The result is that black South African churches do not have the economic, educational and doctrinal strength that can make them a m 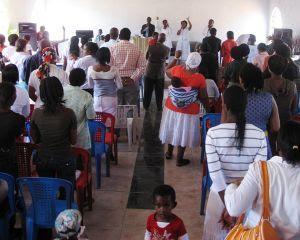 issionary force into the rest of Africa—at least, not yet. There is a growing middle class among the South African black people, but they are yet to appreciate the Reformed faith so that it can propel them to bring down the altars of man-centred worship and erect God-centred Christianity in their churches, let alone across the continent. The day this happens, the sleeping giant of “the land of contrasts” would have been awakened, and the cause of Christ across the continent will receive an impetus never known before since the days of the early missionary movement. This is what we should be praying for. This is what we should be working towards.
Posted by Conrad Mbewe at 6:39 PM

Email ThisBlogThis!Share to TwitterShare to FacebookShare to Pinterest
Labels: Other countries